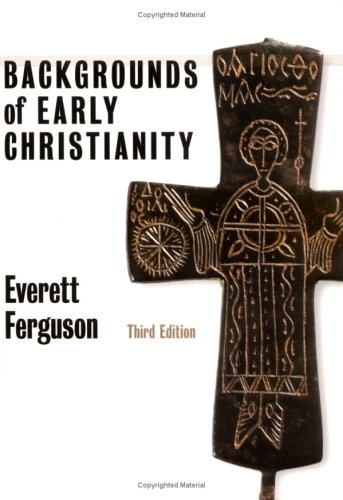 Having long served as a standard introduction to the world of the early church, Everett Ferguson's "Backgrounds of Early Christianity" has been expanded and updated in this third edition. The book explores and unpacks the Roman, Greek, and Jewish political, social, religious, and philosophical backgrounds necessary for a good historical understanding of the New Testament and the early church. New to this edition are revisions of Ferguson's original material, updated bibliographies, and fresh discussions of first-century social life, of Gnosticism, and of the Dead Sea Scrolls and other Jewish literature.

October 1, 2004 5 5
The historical setting for the New Testament and early Christianity may be described as a series of concentric circles. The Roman world provided the outer circlethe government, legal, and econom ic context. The Greek world provided the cultural educational, and philosophical context. The Jewish world was the matrix of early Christianity providing the immediate religious context. (1) Reading the third edition of Backgrounds for review is circular for me, as well; I first encountered Fergusons second edition during my final year of coursework for my Master of Divinity. I first encountered Ferguson himself after the delivery of my first paper for the North American Patristics Society while I was a Ph.D. candidate. Now, years later with Ph.D. in hand, I am returning to the book that began my scholarship into the world and context of earliest Christianity. I owe a debt to this book, and I suspect I am not alone. Many of the current generation of ministers and scholars discovered the world of nascent Christianity with Ferguson as guide. The bibliography of reviews that 1the first and second editions has generated is daunting. Reviewing, yet again, so widely 1. Note, for a beginning, the following for the second edition: Dennis Stoutenburg JETS 39 (1996): 15253; Martin Parmentier Bijdr 57.1 (1991): 97; Charles B. Ashanin CH 64 (1995): 63637; Thomas Lea CTR 7 (1994): 13435; Branan Becknell Near East Archaeological Society Bulletin NS 3940 (1994/95): 12022; Keith Essex MSJ 5.2 (1994): 21617; Jeffrey T. Reed NTS 55 (1994): 1252 6. [Full Review]