Jesus & the Rise of Early Christianity: A History of New Testament Times 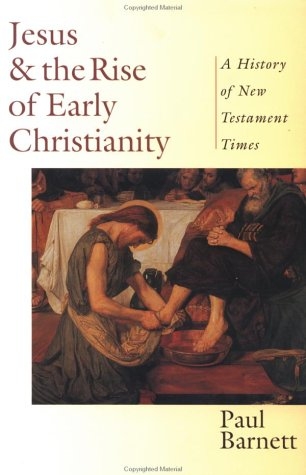 The pathway to understanding the New Testament leads through the vibrant landscape of the first-century Greco-Roman world. The New Testament is rooted in the concrete historical events of that world.In Jesus and the Rise of Early Christianity Paul Barnett not only places the New Testament within that world of caesars and Herods, proconsuls and Pharisees, Sadducees and revolutionaries, but argues that the mainspring and driving force of early Christian history is the historical Jesus. We cannot understand the rise of Christianity apart from this Jesus, the messiah of Israel and the spiritual and intellectual impact he had on his immediate followers and those who succeeded them.From his intimate acquaintance with the sources, the evidence and the problems of New Testament history, Barnett offers fresh insights. His telling of the story skillfully avoids the encumbrance of extraneous details and side journeys. From the brith of Jesus to the founding of the messianic community, from the rise of Paul's mission to the Gentiles to the writing of the Gospels, Barnett offers a comprehensive account of the movement that would change the face of world history.Jesus and the Rise of Early Christianity is a comprehensive survey of New Testament history that will meet the needs of students and teachers of the New Testament. In its engagment with contemporary scholarship and its emphasis on the propelling role of the historical and risen Jesus in the rise of Christianity, it provides a timely rejoinder to current revisionist exploration of Christian origins.