A Greek-English Lexicon of the New Testament and Other Early Christian Literature, 3rd Edition

A Greek-English Lexicon of the New Testament and Other Early Christian Literature, 3rd Edition Walter Bauer 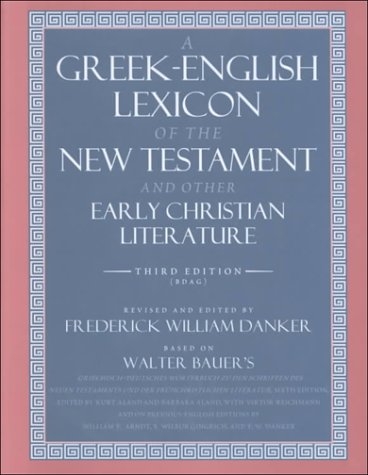 Described as an "invaluable reference work" (Classical Philology) and "a tool indispensable for the study of early Christian literature" (Religious Studies Review) in its previous edition, this new updated American edition of Walter Bauer's Wörterbuch zu den Schriften des Neuen Testaments builds on its predecessor's staggering deposit of extraordinary erudition relating to Greek literature from all periods. Including entries for many more words, the new edition also lists more than 25,000 additional references to classical, intertestamental, Early Christian, and modern literature.

In this edition, Frederick W. Danker's broad knowledge of Greco-Roman literature, as well as papyri and epigraphs, provides a more panoramic view of the world of Jesus and the New Testament. Danker has also introduced a more consistent mode of reference citation, and has provided a composite list of abbreviations to facilitate easy access to this wealth of information.

Perhaps the single most important lexical innovation of Danker's edition is its inclusion of extended definitions for Greek terms. For instance, a key meaning of "episkopos" was defined in the second American edition as overseer; Danker defines it as "one who has the responsibility of safeguarding or seeing to it that something is done in the correct way, guardian." Such extended definitions give a fuller sense of the word in question, which will help avoid both anachronisms and confusion among users of the lexicon who may not be native speakers of English.

Danker's edition of Bauer's Wörterbuch will be an indispensable guide for Biblical and classical scholars, ministers, seminarians, and translators. Referred to by most using the acronym "BDAG".

October 1, 2002 5 5
der frühchristlichen Literatur, sixth edition, ed. Kurt Aland and Barbara Aland, with Viktor Reichmann and on previous English editions by W. F. Arndt, F. W. Gingrich, and F. W. Danker. Chicago and London: The University of Chicago Press, 2000. Pp. lxxx + 1,108. $85.00. ISBN 0226039331. Introduction by John T. Fitzgerald University of Miami Coral Gables, FL 33124 Greek lexicography was a flourishing discipline long before the birth of Jesus and 1the rise of early Christianity. Already during the Hellenistic period the city of Alexandria attained prominence as a center for lexical studies, with scholars such as Aristophanes of Byzantium active in that city. Lexical works continued to be produced during subsequent periods, including the first century C.E., when Pamphilus of Alexandria compiled a comprehensive Greek lexicon that filled 95 books for just the letters E through W. The Atticistic revival turned lexicography into a virtual cottage industry, with numerous Greek lexicons produced. These lexical works aided ancient readers by defining rare and obsolete words, explaining odd forms and expressions, and offering other kinds of assistance. Bilingual glossaries (Greek-Latin, Greek-Coptic, etc.) were also common, designed primarily as word lists to facilitate rapid reading of ancient texts and authors such as Homer. The NT was thus produced in a world that was concerned with lexicography, and attempts to explain various terms and practices appear already in the NT itself (e.g. John 1:38; Mark 7:3-4). As early Christians endeavored to understand the Bible and proclaim its message, it was natural that they should offer lexical observations in their sermons, letters, commentaries, and various treatises. They eventually began to produce not only 1 For a brief treatment of ancient and medieval Greek lexicography and a short history of NT lexicons and related lexical aids, plus bibliography, see J. T. Fitzgerald, “Lexicons, New Testament,” in Dictionary of Biblical Interpretation (ed. J. H. Hayes; 2 vols.; Nashville: Abingdon, 1999), 2:62-66. [Full Review]
Review of Biblical Literature (RBL)

October 1, 2002 5 5
der frühchristlichen Literatur, sixth edition, ed. Kurt Aland and Barbara Aland, with Viktor Reichmann and on previous English editions by W. F. Arndt, F. W. Gingrich, and F. W. Danker. Chicago and London: The University of Chicago Press, 2000. Pp. lxxx + 1,108. $85.00. ISBN 0226039331. Terry Roberts University of Sydney Sydney, NSW 2006, Australia “This revision makes a primary departure in the use of bold roman typeface to highlight the meanings of words in their functional usage ... this revision builds on and expands Bauer’s use of extended definitions ... Extended definitions are given in bold roman and may be followed by one or more formal equivalents in bold italics. The user of the lexicon can explore such equivalents for translation of passages that follow, but within the boundaries of the definition” (BDAG, p. viii, paragraph 1). Danker, and the publisher, are justified in focusing attention on the inclusion of definitions in the third edition of this important New Testament (NT) lexicon. Any reader familiar with the second edition (BAGD - 1979, details below) will notice an immediate and sharp improvement in semantic clarity and presentation in this third edition. BAGD employed glosses—an English word or phrase or selection of these—to assign meaning. These are what BDAG refers to above as formal equivalents. The unfortunate consequences of relying on glosses alone to convey semantic content accurately, which is the approach generally used in Greek lexicography, have been pointed out by many, including Danker elsewhere in the paragraph referred to above. The NT lexicon of Louw and Nida (LN - 1988, details below) was based expressly on the principle of providing definitions: “For many persons the most distinctive and helpful feature of this lexicon is the fact that meanings are indicated by definitions and not simply by glosses, as in most dictionaries” (LN vol 1, p. vii). It is a credit to Danker that he has adopted this process: difficult, frustrating and time-consuming as it is. Such labour deserves recognition and critical attention. In this review, therefore, I will look squarely at this aspect of the lexicon. [Full Review]
Review of Biblical Literature (RBL)

October 1, 2002 5 5
der frühchristlichen Literatur, sixth edition, ed. Kurt Aland and Barbara Aland, with Viktor Reichmann and on previous English editions by W. F. Arndt, F. W. Gingrich, and F. W. Danker. Chicago and London: The University of Chicago Press, 2000. Pp. lxxx + 1,108. $85.00. ISBN 0226039331. Abraham J. Malherbe Yale University Divinity School New Haven, CT 06511 Frederick Danker and the late F. Wilbur Gingrich published the second, revised English translation of Bauer's lexicon in 1979 (= BAGD). Danker is solely responsible for the present edition, and it is right that the abbreviation for the volume henceforth be BDAG, recognizing the energy he invested in producing a lexicon that bears his stamp and in important respects differs from previous editions. This review will draw attention to some of those differences, particularly to changes from the second revision. Rather than simply list different meanings of a word, Danker aims at expanding Bauer's definitions to attain greater clarity. A new structure of the lemmata, augmented by a new typography, is designed to achieve this end, for example, in the lemma a)rxh/, which has seven sets of meaning, each marked by a bold arabic numeral against a solid round black background, followed by a definition in bold roman, and then by an equivalent in bold italic, for example: “1 the commencement of someth. as an action, process, or state of being, beginning, i. e. a point of time at the beginning of a duration.” Subsets of meaning are marked by the traditional use of lettering (a, b, a, b, etc.) and are printed in normal italic, as are translations of references, supplied when deemed appropriate. Another most welcome feature is that all NT references are in bold roman, making it easier for the reader to find a passage of interest. This is a beautiful, user-friendly book, and the editor and the publisher deserve to be congratulated on its production. In physical appearance as well as content it marks a change in the tradition of Bauer lexicons. [Full Review]
Review of Biblical Literature (RBL)

October 1, 2002 5 5
der frühchristlichen Literatur, sixth edition, ed. Kurt Aland and Barbara Aland, with Viktor Reichmann and on previous English editions by W. F. Arndt, F. W. Gingrich, and F. W. Danker. Chicago and London: The University of Chicago Press, 2000. Pp. lxxx + 1,108. $85.00. ISBN 0226039331. Hans-Josef Klauck University of Chicago Divinity School Chicago, IL 60637 Abbreviations sometimes have to tell their own history. From the foreword (p. v-xi) to this revised edition of an indispensable tool we can extract the following list: BAG for Bauer-Arndt-Gingrich, the first English translation of Bauer’s monumental work, based on Bauer’s fourth edition from 1949-52 and published in 1957; BAGD for Bauer-Arndt-Gingrich-Danker from 1979, incorporating the new material from Bauer’s fifth edition (1957-58) and “a vast amount of reference to studies that postdated it” (p. vii); BAAR for Bauer-K.Aland-B.Aland-Reichmann, the revised sixth German edition from 1988, and BDAG for Bauer-Danker-Arndt-Gingrich, the present edition from 2000, which not only comes as a crowning achievement of a long and distinguished history of NT lexicography, but by the order of names at the same time respects Bauer’s original 1input and gives due honor to Danker for his continued and valuable contribution. Danker succeeds in improving not only on his immediate predecessor BAGD, but also on 2the last German version BAAR. 1 The article of Walter Bauer, “An Introduction to the Lexicon of the Greek New Testament,” which is reproduced on pp. xiii-xxix of BDAG, is, as Danker aptly remarks, of “timeless value” (p. xiii); for the German original “Zur Einführung in das Wörterbuch zum Neuen Testament,” which was first published in 1955 as vol. 15 of ConBNT, see now Walter Bauer, Aufsätze und kleine Schriften (ed. G. Strecker; Tübingen: Mohr, 1967), 61-90. [Full Review]
Review of Biblical Literature (RBL)

October 1, 2002 5 5
der frühchristlichen Literatur, sixth edition, ed. Kurt Aland and Barbara Aland, with Viktor Reichmann and on previous English editions by W. F. Arndt, F. W. Gingrich, and F. W. Danker. Chicago and London: The University of Chicago Press, 2000. Pp. lxxx + 1,108. $85.00. ISBN 0226039331. Harold W. Attridge Yale University Divinity School New Haven, CT 06511 The latest version of Walter Bauer’s venerable lexicon, hereafter “Danker,” has many features that enhance the work’s readability. New typographical design features, including bold and italics, render the lexical entries more transparent. The use of boldface for references to the NT makes them easier to spot within long and complex entries. Abbreviations have frequently been simplified, and a newly organized listing in the front matter will make the sometimes unfamiliar readily accessible. Within individual entries there have been numerous changes, mostly minor. Extended definitions, the fundamental lexical strategy throughout (see p. viii), have sometimes been expanded, as has the list of translation equivalents. New lexical data, particularly from Jewish pseudepigrapha and from early Christian sources, have been added. Bibliographies have occasionally received new items. Corrections are rare and usually tailor lexical discussions to modern sensitivities in the appropriate use of gendered language. In order to illustrate what the new edition does and does not do, let me offer three detailed comparisons from different lexical classes, each item of particular interest to my own work on the Epistle to the Hebrews and the Gospel of John. The entry for the noun shmei=on exemplifies many of the alterations. After the lemma, the initial comment adds to BAGD the suggestion to “s. prec. entry,” and notes a broader range of attestation, now to include the pseudepigrapha and patristic sources, Hippolytus, Ref. 6.27.4 and Didymus the Blind on Genesis. The old entry concluded with the general translational equivalent, “sign.” Danker expands that to “‘symbol’; gener. ‘sign.’” The body of the article replicates the organization of BAGD. The first meaning is “a sign or distinguishing mark whereby someth. [Full Review]