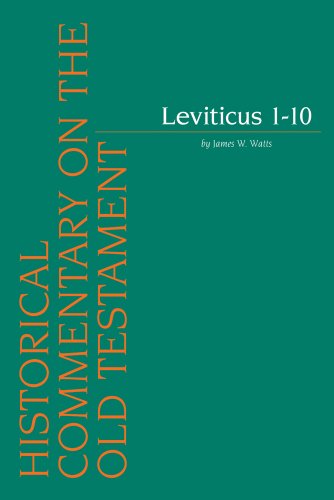 James Watts uses rhetorical analysis for this detailed exposition of Leviticus 1-10. In dialogue with a wide variety of contemporary scholarship on Leviticus, this commentary also engages the history of the book’s interpretation and the history of Jewish and Christian ritual practices. Leviticus’s rhetoric aimed to persuade ancient Israelites to make offerings to God. It legitimized the monopoly of Aaronide priests over Israel’s offerings and over determining correct ritual practice. The priests in turn established the Torah containing Leviticus as the authoritative text of Israel’s religion. Rhetorical analysis of Leviticus thus leads to new insights into the role of priests in raising the Pentateuch to the status of scripture and in shaping the biblical canon. It also calls attention to the role of ritual rhetoric in the polities of later Jewish and Christian groups, despite the fact that neither religion makes animal offerings as Leviticus 1-10 mandates.