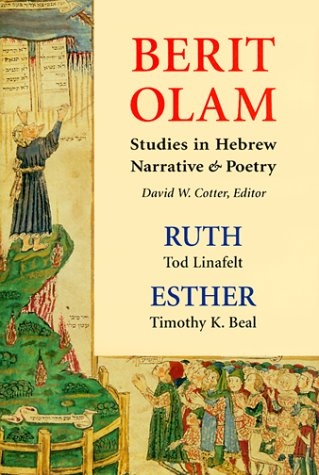 Some ancient works of literature survive in fragments that appear so simple and complete it's hard to imagine them as being part of a larger narrative. Such is the case with Ruth and Esther. On first reading they appear so simple, so whole, and their meanings so completely self-evident. Yet the closer you look, the more perplexing they become. Ruth and Esther offers that close look, enabling readers to discover the uncertainties of the texts and demonstrating how these uncertainties are not problems to be solved, but rather are integral to the narrative art of these texts.

In Ruth, the first part of this volume, Tod Linafelt highlights the most unresolved and perplexing aspects of Ruth. In doing so he offers an interpretation he calls "unsettling." Linafelt states that it is unsettling in the sense that he often refuses to settle on a single, unequivocal meaning of a particular word, phrase, or theme. Rather he prefers to underscore the dual or even multiple meanings that the narrative so often has. Another way Ruth differs from other interpretations is that Linafelt entertains the possibility that there might be complexity or ambiguity with regard to the various characters motivations, the presentation of God, or the books purpose. In this commentary, Linafelt explores the ambiguities of meaning built into the grammar, syntax, and vocabulary of the story to discover how these ambiguities carry over to the larger interpretive issues of characterization, theology, and purpose. He also lays forth an argument that the book of Ruth is intended to be read as an interlude between Judges and Samuel.

The second part of this volume focuses on Esther, a story of anti-Judaism that raises strikingly contemporary questions concerning relations between sexism, ethnocentrism, and national identity. In Esther Timothy Beal guides readers into the meaning of the story using rhetorical criticism. He asks questions without assuming that there must be answers and allows for complexity, perplexity, and the importance of accidents in the text. In essence, Beal emphasizes the particular over the general and the tentative over the continuous; however, he does not altogether dismiss the importance of broader interpretations of Esther, especially those focusing on narrative structure.

Chapters in Ruth are The Bond between Ruth and Naomi, Finding Favor in Boazs Field, An Ambiguous Encounter in the Night, and Making It All Legal.

November 26, 2001 5 5
Collegeville: Liturgical Press, 1999. Pp. xxv + 90; pp. xxii + 130, Cloth, $34.95, ISBN 0814650457. Series Editor: David W. Cotter Timothy S. Laniak Gordon-Conwell Theological Seminary Charlotte, NC 28104 This double commentary begins with Tod Linafelt’s discussion of Ruth, a stimulating, well-written journey along the contours of the received text. It is a close reading of the story’s details with a perceptive eye open to key words and word play, intertextuality, chiasm, parallelism, rhythm, reversal, and, above all, ambiguity in the narrative. The commentary is a treat to read. Although the author is generally irenic in relation to other scholars, the analysis begins with a critical assertion that most readings of the book of Ruth “betray a view of the narrative as fundamentally facile” (p. xiii). Linafelt’s reading, in contrast, is one which seeks to avoid such reductionism by appreciating the “exceedingly complex and ambiguous” nature of the story. “In this commentary,” he continues, “I intend to highlight that which is most unresolved and even perplexing about the narrative” (ibid.). It is likely that this willingness to re-read Ruth with a sense for the subtle, the multivalent, the indirect, and the ambiguous has primed Linafelt for his best insights. It is also likely, however, that a fully consistent embracing of such features in the text would have changed the outcome of the commentary in one very important instance. The evidence for ambiguity and double entendre is well-documented throughout the commentary. Perhaps it is at its best in the analysis of subtle references to sexuality detected in Ruth 2 & 3. A well-argued case is made for a thoroughgoing double meaning of the verb to know throughout chapter 3. Linafelt’s case for a subversive Ruth is suggestive when noting slight changes in Ruth’s recollection of her superiors’ words (p. [Full Review]