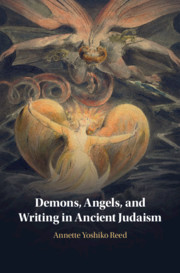 What did ancient Jews believe about demons and angels? This question has long been puzzling, not least because the Hebrew Bible says relatively little about such transmundane powers. In the centuries after the conquests of Alexander the Great, however, we find an explosion of explicit and systematic interest in, and detailed discussions of, demons and angels. In this book, Annette Yoshiko Reed considers the third century BCE as a critical moment for the beginnings of Jewish angelology and demonology. Drawing on early 'pseudepigrapha' and Aramaic Dead Sea Scrolls, she reconstructs the scribal settings in which transmundane powers became a topic of concerted Jewish interest. Reed also situates this development in relation to shifting ideas about scribes and writing across the Hellenistic Near East. Her book opens a window onto a forgotten era of Jewish literary creativity that nevertheless deeply shaped the discussion of angels and demons in Judaism and Christianity.