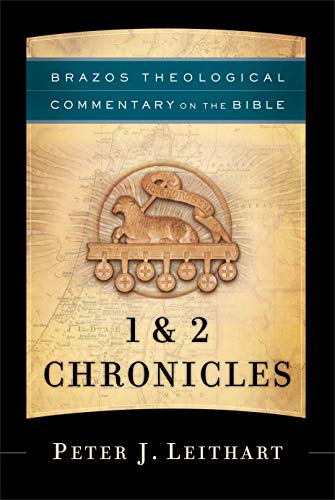 Peter Leithart, a respected theologian known for his ability to communicate to a broad audience, offers a theological reading of 1 and 2 Chronicles. Leithart uncovers the narrative logic of Chronicles, highlights the role of music and government in Israel and in the church, and shows how Judah's history moves from the world of the monarchy to the postexilic world in which Israel is scattered among Gentiles. This commentary is designed to serve the church, providing a rich resource for preachers, teachers, students, and study groups.

5 out of 5 based on 1 user ratings
Neal Piwowarski

August 8, 2020 5 5
The commentary begins with a succinct, but enlightening introduction to 1 & 2 Chronicles wherein Leithart makes the case that the books are a recapitalization of Israelite history from Genesis through the establishment of the Israelite monarchy. He then lays out his approach taken for the commentary proper, highlighting what 1 & 2 Chronicles have to teach about matters of ecclesiology (particularly as it pertains to Church structure) and corporate worship. While consulting major commentaries, he admits to focusing on literary structure to help make theological points and, as he puts it, make Chronicles ‘preachable.’ The first section of the commentary proper deals with the genealogies that comprise the first nine chapters of 1 Chronicles. Leithart’s comments on the significance of genealogies are very illuminating. Discussion of the Hebrew words toledoth (‘generations’) and qahal (‘assembly’) frames his discussion of parallelism between Chronicles and Genesis. His comments on Jabez (p. 20) in particular are theologically astute. After reading Leithart’s commentary, you’ll likely never skip over 1 Chronicles Chapters 1 through 9 ever again during your daily Bible reading due to misunderstanding or sheer boredom with reading genealogies. Next, the commentary segues into discussion of 1 Chronicles 10, which parallels the death of King Saul to Israelite enslavement in Egypt. Then, 1 Chronicles 10-29 discusses parallels between David’s reign with the Exodus and the journey from Sinai to the land of Canaan. The commentary on 2 Chronicles draws comparisons between Solomon’s reign (2 Chronicles Chapter 1 through Chapter 9) with the conquest of Joshua. The division of the Kingdom into Israel and Judah (2 Chronicles Chapters 10 through 35) is paralleled with the period of the Judges, which ended with Saul. Finally, the decree of Cyrus (2 Chronicles Chapter 36) is discussed alongside the establishment of the Israelite monarchy. Leithart shows his adeptness at demonstrating the relationship between Chronicles and these various other books of the Hebrew Bible. Throughout his discussion, he upholds a high view of Scripture by demonstrating how Chronicles complements Samuel, for example. This is in stark contrast to more critical commentaries, which tend to focus on alleged contradictions between the various sources and pit them against each other. Instead, Leithart upholds their historical veracity. His discussion of worship and the structure of the temple is particularly helpful for demonstrating that proper worship of God has a definite content, order, and structure to it. This intertextual commentary goes on to show parallels between the construction of Solomon’s temple and the Genesis creation account. At one point, Leithart even compares Abijah’s speech to the Protestant Reformation (P.141). This is done more for homiletical purposes than for exegetical insight. The primary aspect of 1 & 2 Chronicles that Leithart highlights is their literary structure. The commentary is replete with structural outlines for each section that will prove useful for preaching and teaching the text. This feature of the book is immensely helpful for those who may be confused by these two biblical documents. Overall, this is an excellent homiletical commentary on the theology of 1 & Chronicles that’s every bit as insightful as Leithart’s previous Brazos Theological Commentary volume on 1 & 2 Kings. This volume certainly gives additional help to teachers and preachers. It doesn’t delve into the dating of the books in the same way the previous volume doesn’t. You’ll have to look elsewhere for discussion of those matters. Its intertextual parallels are sound and drawn out of sound exegesis. Leithart certainly upholds the Reformational belief that Scripture interprets Scripture. The publisher would be wise to make Leithart an editor for all forthcoming Old Testament volumes in the series. Such a move would greatly improve their overall usefulness and quality. I highly recommend this book for seminary, Bible college, and Sunday school use. It’s a solid ‘big picture’ commentary on the theology of 1 & 2 Chronicles. It should definitely be consulted for homiletical purposes as well.