Why Should Experts Ignore Acts in Pauline Research? in "The Early Reception of Paul the Second Temple Jew: Text, Narrative and Reception History" 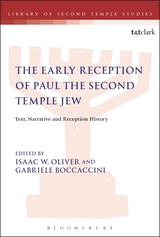 Paul was a Pharisaic Jew whose moment of revelation on the road to Damascus has made him the most famous early Christian convert. His relationship to Christianity is and has been a topic of great interest to scholars of early Christianity and Judaism. This collection of essays examines how Christians of the first two centuries perceived Paul's Jewishness and how they seized upon Paul's views on Judaism in order to advance their own claims about Christianity. The essays offer a comprehensive examination of various Christian views on Paul in texts contained both in and outside of the New Testament. Thus, the essays elucidate how the reception of Paul's thought affected the formation of Judaism and Christianity into separate entities.

The chapters include an analysis of Marcion, Paul and the Jews by Judith Lieu, as well as musing on the placement of Acts in Pauline research by James H. Charlesworth and an analysis of Paul in relation to the Greek Old Testament from Harry O. Maier.