One True Life: The Stoics and Early Christians as Rival Traditions 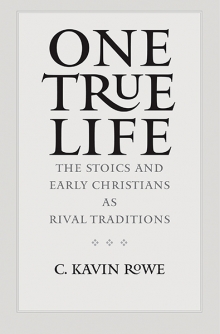 In this groundbreaking, cross-disciplinary work of philosophy and biblical studies, New Testament scholar C. Kavin Rowe explores the promise and problems inherent in engaging rival philosophical claims to what is true. Juxtaposing the Roman Stoics Seneca, Epictetus, and Marcus Aurelius with the Christian saints Paul, Luke, and Justin Martyr, and incorporating the contemporary views of Jeffrey Stout, Alasdair McIntyre, Charles Taylor, Martha Nussbaum, Pierre Hadot, and others, the author suggests that in a world of religious pluralism there is negligible gain in sampling from separate belief systems. This thought-provoking volume reconceives the relationship between ancient philosophy and emergent Christianity as a rivalry between strong traditions of life and offers powerful arguments for the exclusive commitment to a community of belief and a particular form of philosophical life as the path to existential truth.