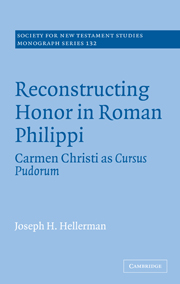 This book examines Paul's letter to the Philippians against the social background of the colony at Philippi. After an extensive survey of Roman social values, Professor Hellerman argues that the cursus honorum, the formalized sequence of public offices that marked out the prescribed social pilgrimage for aspiring senatorial aristocrats in Rome (and which was replicated in miniature in municipalities and in voluntary associations), forms the background against which Paul has framed his picture of Jesus in the great Christ hymn in Philippians 2. In marked contrast to the values of the dominant culture, Paul portrays Jesus descending what the author describes as a cursus pudorum ('course of ignominies'). The passage has thus been intentionally framed to subvert Roman cursus ideology and, by extension, to redefine the manner in which honour and power were to be utilized among the Christians at Philippi.

December 11, 2016 5 5
Arguably the best academic monograph on Philippians 2:6-11, one of the most debated passages in the Bible. [Full Review]