Riches, Poverty, and the Faithful: Perspectives on Wealth in the Second Temple Period and the Apocalypse of John

Riches, Poverty, and the Faithful: Perspectives on Wealth in the Second Temple Period and the Apocalypse of John Mark D. Mathews 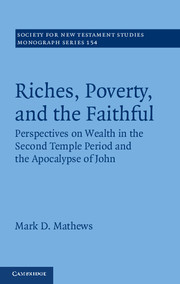 In the book of Revelation, John appeals to the faithful to avoid the temptations of wealth, which he connects with evil and disobedience within secular society. New Testament scholars have traditionally viewed his somewhat radical stance as a reaction to the social injustices and idolatry of the imperial Roman cults of the day. Mark D. Mathews argues that John's rejection of affluence was instead shaped by ideas in the Jewish literature of the Second Temple period which associated the rich with the wicked and viewed the poor as the righteous. Mathews explores how traditions preserved in the Epistle of Enoch and later Enochic texts played a formative role in shaping John's theological perspective. This book will be of interest to those researching poverty and wealth in early Christian communities and the relationship between the traditions preserved in the Dead Sea Scrolls and New Testament.