The Book of Proverbs

The Book of Proverbs A. J. Rosenberg 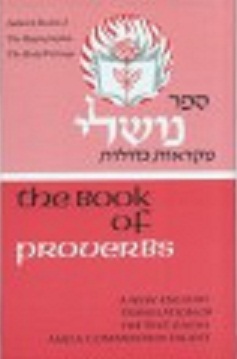 As stated at the very beginning of the text, The Book of Proverbs was authored by King Solomon. It was edited by Hezekiah and his colleagues (Baba Bathra 15a). Its superscriptions divide the Book of Proverbs into five parts. The first part (chapters one through nine) commences with the superscription The proverbs of Solomon the son of David, king of Israel. The second part, which begins at chapter 10, begins with The proverbs of Solomon. The third part commences at chapter 25 with These too are proverbs of Solomon; the fourth part at chapter 30, with the words The words of Agur son of Jakeh; the fifth part at chapter 31, with the words The words of King Lemuel. The Book of Proverbs ends with the famous Aishes Chayil chapter that depicts the deeds and demeanor of the Jewish woman of valor. This invaluable aid to learning Tanach is used by students around the world! It provides the benefit of owning two sets in one, since each volume features both the complete Hebrew Mikraoth Gedoloth as well as a concise, modern English translation of the text with extensive commentary. In addition, each and every Rashi is translated, as are selections from the Ramban, Sforno, Rashbam, Ibn Ezra, from Talmudic and Midrashic sources, and numerous other commentaries never before translated. Rabbi Moshe Feinstein, zt"l, gave his unstinting approbation to this now classic series.