The Books of Esther, Song of Songs, Ruth

The Books of Esther, Song of Songs, Ruth A. J. Rosenberg 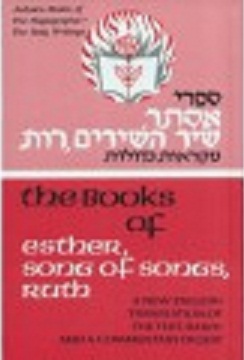 The Book of Esther recounts the well-known miracle of Purim, when the Jews of the Persian empire were saved from annihilation at the hands of the gentile populace. The Song of Songs deals with a maiden whose husband left her for many years, promising to return and restore her to her previous status. The allegorical meaning is that the people of Israel, so long in exile, will ultimately be restored to the Holy Land, and the Shechinah will once again rest upon them. The Book of Ruth relates the story of a Moabite woman who married a Jewish man and was reduced to poverty after her husband's demise. She accompanied her mother-in-law to the Holy Land, where she ultimately remarried the Judge of Israel, and became the matriarch of the royal House of David. This invaluable aid to learning Tanach is used by students around the world! It provides the benefit of owning two sets in one, since each volume features both the complete Hebrew Mikraoth Gedoloth as well as a concise, modern English translation of the text with extensive commentary. In addition, each and every Rashi is translated, as are selections from the Ramban, Sforno, Rashbam, Ibn Ezra, from Talmudic and Midrashic sources, and numerous other commentaries never before translated. Rabbi Moshe Feinstein, zt"l, gave his unstinting approbation to this now classic series. These books are perfect for students and teachers who want a deeper understanding of Tanach.