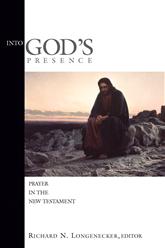 One cannot fully understand the New Testament without grasping the importance of prayer throughout its pages. Yet prayer has received limited attention as a topic for serious study. Into God's Presence offers a comprehensive look at the nature and use of prayer in the life and ministry of Jesus, in his teachings, and among his earliest followers.

Written by twelve leading biblical scholars with diverse confessional perspectives, the book first sets the background of Christian prayer by discussing prayer in the Old Testament, the Greco-Roman world, first-century Judaism, and the Dead Sea Scrolls. The rest of the book studies prayer as it appears from Matthew to Revelation, with special attention given to Jesus as an exemplar and teacher of prayer.

November 1, 2003 5 5
Each of the twelve essays in this collection aims to illuminate in some way the topic of prayer in the New Testament. The first of the books three sections is devoted to The Setting and includes four essays that, collec tively, cover what is often considered basic background material for the New Testament: Christopher R. Seitz, Prayer in the Old Testament or Hebrew Bible; David E. A une, Prayer in the Greco-Roman World; Asher Finkel, Prayer in Jewish Life of the First Century as Background to Early Christianity; and Eileen M. Schuller, Pra yer in the Dead Sea Scrolls. The second section, Jesus and the Gospels, contains four essays that fit together only loosely: Stephen Farris, The Canticles of Lukes Infancy Narrative: The Appropriation of a Biblical Tradition; I. Howard Marshall, JesusExample and Teacher of Prayer in the Synoptic Gospels; N. T. Wright, The Lords Prayer as a Paradigm of Christian Prayer; and Andrew T. Lincoln, Gods Name, Jesus Name, and Prayer in the Fourth Gospel. The third and final section, A cts through the Apocalypse, al so comprises four essays: Joel B. Green, Persevering Together in Prayer : The Significance of Prayer in the Acts of the Apostles; Richard N. Longenecker, Pra yer in the Pauline Letters; J. Ramsey Michaels, Finding Yourself an Intercessor: New Testament Prayer from Hebrews to Jude; and, finally, Richard Bauckham, Prayer in the Book of Revelation. [Full Review]
Review of Biblical Literature (RBL) (Dorothy Jonaitis, Op)

May 1, 2003 5 5
Have you ever looked at a book cover and thought you knew exactly what you weregoing to read and then realized that the title was a misnomer? That was my initialreaction to this book, subtitled Prayer in the New Testament. The first two chapters werewell-written exposés of the material assigned to the writers, but they left this reader flat interms of her expectations. That was especially true of chapter 2 on prayer in the Greco-Roman world, which was referred to only once in all later articles. When I began readingchapter 3 (43), the article by Asher Finkel entitled “Prayer in Jewish Life of the FirstCentury As Background to Early Christianity,” I grew excited to continue reading whatwas assigned for review. I am unsure how I would have changed the title, so, perhaps thebook would have been more solidly outlined if chapter 2 had not been included.The book consists of twelve articles by different writers organized under threesubheadings of four articles each: (1) “The Setting,” (2) “Jesus and the Gospels,” and (3)“Acts through the Apocalypse.” As the editor explains in the preface, each article waswritten to give evidence of “first-class biblical scholarship” while, at the same time,“written in a manner capable of capturing the interest of intelligent lay people,theological students, and ministers” (ix). [Full Review]