Christology in the Making: A New Testament Inquiry Into the Origins of the Doctrine of the Incarnation

Christology in the Making: A New Testament Inquiry Into the Origins of the Doctrine of the Incarnation James D. G. Dunn 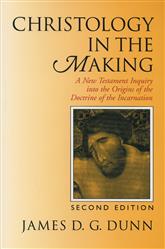 The New Testament documents cover an intense period of innovation and development in what we now call "Christology." Before Jesus, "Christology" either did not exist, or existed, properly speaking, only in different forms of "messianic expectation." At the end of that period, however, an advanced and far-reaching Christology is already in place that does not hesitate to speak of Jesus as "God."

This excellent study of the origins and early development of Christology by James D. G. Dunn clarifies in rich detail the beginnings of the full Christian belief in Christ as the Son of God and incarnate Word. By employing the exegetical methods of "historical context of meaning" and "conceptuality in transition," Dunn illumines the first-century meaning of key titles and passages within the New Testament that bear directly on the development of the Christian understanding of Jesus.

Chosen by Christianity Today as one of the year's "Significant Books" when it first appeared in 1980, this second edition of Christology in the Making contains a new extended foreword that responds to critics of the first edition and updates Dunn's own thinking on the beginnings of Christology since his original work.