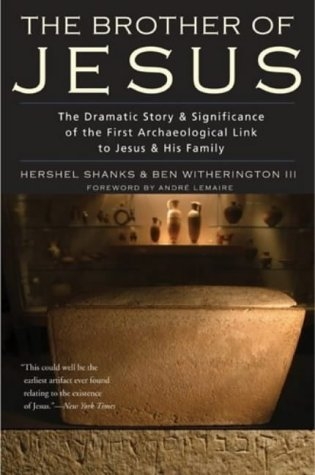 Towards the end of 2002, Andre Lemaire, from the Sorbonne, discovered, whilst visiting a Jewish antiquities dealer, an ossuary - or bone box - which bears the inscription "James, son of Joseph, brother of Jesus". This discovery immediately caused widespread international interest and it was heralded as the most important archaeological discovery ever about Jesus.In The Brother of Jesus, Hershel Shanks, who has been at the forefront in making archaeological discoveries known and understood by the public (for example, the Dead Sea Scrolls) joins forces with renowned scholar Ben Witherington to recount the discovery and the authentication of the ossuary in compelling detail. After having examined the scientific evidence and the palaeography of the inscription, Hershel Shanks concludes that the inscription on the ossuary is genuine. Witherington examines its implications for understanding Jesus, and his family and followers, and offers a unique insight into the early days of Christianity and the Jewish Christian community in Jerusalem, which was led by Jesus' brother James. The Brother of Jesus explains why this discovery matters.