Be Responsible (1 Kings): Being Good Stewards of God's Gifts 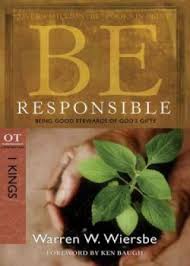 The ancient proverb rings just as true today, and it is with this challenge for personal responsibility that Dr. Warren Wiersbe begins this latest installment of his comprehensive study through the Bible. Responsibility is not a popular concept for modern sensibilities that prefer to emphasize victimization and blame-seeking. Unfortunately, finding even leaders who will take it can be difficult, to say the least.

King David knew what it meant to be a responsible leader, and so did his son Solomon . . . until the closing years of his reign. But out of the twenty subsequent kings who reigned in Judah, only eight could be called good kings and responsible men who sought to obey God.
Tragically, not only was there a lack of political moral leadership, but the spiritual leadership (priests and prophets) notoriously failed both God and the people.

As you follow along with Dr. Wiersbe in this study of 1 Kings, you will see over and over again the importance of moral character in leaders, as well as the tragedy of leaving God out of national affairs. Clearly the call to Be Responsible is as much a need today as it was in the age of Judah’s kings.

Dr. Warren W. Wiersbe is an author and Writer-in-Residence at Corner-stone College in Grand Rapids, Michigan. He has pastored three churches, including Moody Church in Chicago; and he served as General Director and Bible teacher for Back to the Bible Broadcast.
Personal and Group Study Guide Included