A Case for Historic Premillennialism: An Alternative to "Left Behind" Eschatology

A Case for Historic Premillennialism: An Alternative to "Left Behind" Eschatology 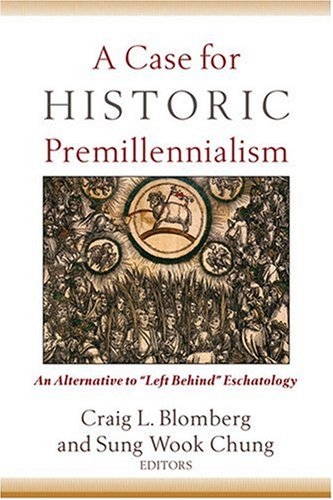 Many evangelical readers who have learned the basics of eschatology from popular authors and more recently from novelists assume that dispensational premillennialism, with its distinctive teachings about the pretribulation rapture of the church, is the only reliable view of the end times and the return of Christ. This volume, however, offers a compelling case for an alternative perspective--one that was widely prevalent throughout church history. The contributors, all respected scholars in their respective fields, suggest that classic premillennialism offers believers a more coherent and viable approach to understanding eschatology. Their studies, which examine eschatology from biblical, theological, historical, and missiological approaches, provide a broadly accessible argument for returning to the perspectives of historic premillennial eschatology.

April 30, 2010 4 5
As can be derived by this title this book is a compilation of articles from a Dallas Theological conference, which layed out an apology for the historic premillennial position, as well as chiding dispensational premillenialism (mainly traditional rather than progressive). Weber sets the tone of the book by dividing premillennialism into the two major categories. He derides popular dispensational novels and movies like "Late Great Planet Earth" purely on a theological level (he does ascertain that some people may have been saved through such mediums). He also gives a decent historical representation of dispensational premillennialism (Ryrie, Scofield, Darby etc). Next Hess looks at the OT and the millennium. He does a wonderful job exposing what the OT had to say about the millennium. His cornerstone argument was well formulated, as he used the book of Ezekiel, amongst other prophets, to prove that its content was to be taken literally rather than spiritually (using the platform of chap 37, an allegory, to reveal that the rest was to be taken literally). He points to documents found in Qumran amongst other places and the way the OT was interpreted. Dalliare tackles the issue from a Judaistic standpoint historically. She uses many arguments from prominent rabbis throughout history as well as intertestamental literature and the Talmud to better understand their approach to the millennium. She is very balanced in her delivery. Blomberg pursues the NT to clarify an historic premillennial position. He does a great job with controversial texts such as Rev 20 and 2 Thess 2. His section, along with Hess' and Chung's delivered a killer blow, in my opinion, to other millennial positions and to dispensationalism. Payne tackles the issue from a purely theological standpoint. His essay is riddled with theological jargon and banter. It can make for a difficult read for those who do not study theology. He attempts to understand how presuppositions driven by internal and external influences can cloud one's exegetical insight. Fairbarn traces millennial positions from the early church fathers. He sites Justin Martyr and Ireneaus amongst other notable early leaders. He also traces the rise of postmilleniannialism/amillennialism after the reign of Constantine. One gripe I had with his referencing was his use if Irenaeus which seemed to better symbolise a pre-warth, midtrib rapture rather than his posttrib position. It did seem to rule out a pretrib rapture in all fairness though. Chung implores his fellow Reformed brothers that premillennialism is the correct view. He utilises the Adamic covenant found in Gen 1 and 2 and masterfully pleads a wonderful case. He also utilises the Abrahamic covenant as well. Both are shown to view that a future earthly reign with Christ must occur according to these covenants. His section is well thought out and delievered convincingly. Campos delves into Latin American missions and the failures associated with classic dispensationalism. He is very gracious towards dispensationalism and sees the progressive movement within dispensationalism as a very positive step in missiology. It is worth having a look at this book if you are interested in looking at a futurist perspective which seems to do more justice to biblical eschatology than dispensationalism. I was not entirely convinced if there will be a posttribulational rapture or a pre-wrath rapture (which I lent towards before reading this book) after reading this book. But the book did reinforce my own view that a raptuire will occur at some point during the latter part of the 7 year period. Both views have some very good points. The only downside is that the midtrib and pre-wrath positions were hardly mentioned within the discussion. I would also disclose that for those who have studied the millennium from a Reformed view would probably see more common ground between amillennialism and historic premillennialism. For some theological provocation just read the chapter written by Chung. It will surely leave you with something to think about.