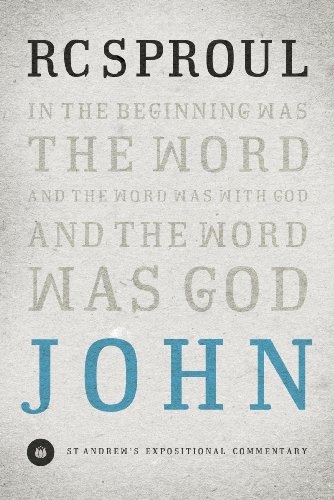 In his latest book, John, Dr. R. C. Sproul offers his readers the fruits of his lifetime of biblical study as expressed in his most recent calling.

Dr. Sproul, a respected seminary teacher, conference speaker, and author, long saw his role in full-time Christian ministry as centered on the task of teaching. But in 1997, God placed him in the position of preaching weekly at St. Andrew's in Sanford, Florida. There, he adopted the ancient Christian practice of lectio continua, or continuous expositions, the method of preaching verse-by-verse through books of the Bible (rather than choosing a new topic each week). Since taking up this task at St. Andrew's, Dr. Sproul has preached through several books of the Bible, including the Gospel of John.

Encouraged by his congregation at St. Andrew's, Dr. Sproul has now begun to adapt these sermon series for a wider audience. The result is the St. Andrew's Expositional Commentary, which is being jointly published by Reformation Trust Publishing and Crossway Books.

In John, Dr. Sproul confesses that he attained a new depth of understanding of the Gospel when he preached through the book. Nevertheless, he came to the Gospel after much study of it, and that familiarity is readily apparent from the first chapter on the Prologue of John's Gospel to the final chapter on Peter's restoration.

John includes fifty-seven chapters, each of which began as a St. Andrew's sermon. Dr. Sproul deals with major themes as he moves through the book passage by passage. Though the book is an "expositional commentary" that is, it does not deal with each and every verse, it unpacks major themes in Dr. Sproul's easily understandable style. Readers will find invaluable insights into the goals John had in writing his Gospel, the background for Jesus' time, and the meanings of some of John's most difficult passages.

John is an easily readable introduction to this unique record of Jesus' life, packed with insights and exhortations that will draw the reader closer to the Savior and encourage him or her to a greater depth of love and devotion to Him.