African Americans and the Bible: Sacred Text and Social Texture 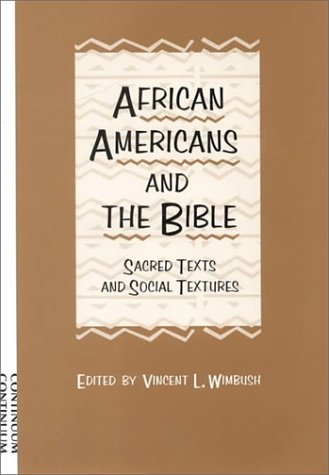 From literature and the arts to popular culture and everyday life, the Bible courses through black society and culture. Despite the enormous recent surge of interest in African American religion, scant attention has been paid to the diversity of ways in which African Americans have utilized the Bible.

African Americans and the Bible is the fruit of a four-year collaborative research project directed by Vincent L. Wimbush and funded by the Lilly Endowment. It brings together scholars and experts (sixty-eight in all) from a wide range of academic and artistic fields and disciplines-including ethnography, cultural history, and biblical studies and also music, film, dance, drama, and literature.

The book is less about the meaning(s) of the Bible than about the Bible and meaning(s), less about the world(s) of the Bible than about how worlds and the Bible interact-in short, about how a text constructs a people and a people construct a text. It is about a particular socio-cultural formation but also about the dynamics that occur in the interrelation between any group of people and sacred texts in general. African Americans and the Bible offers a critical lens through which the process of socio-cultural formation can be viewed.

Following upon the publication of the African American Jubilee Bible and the more recent Jubilee Legacy Bible, this book is eminently fitted to usher in the new millennium. In so doing, it heralds a much more substantive public discourse on the Bible as a potentially unifying and empowering resource for social change."-Cain Hope Felder, Howard University, School of Divinity

December 5, 2009 4.5 5
Essays dealing more with historical and contemporary approaches to handling the OT and NT than readings of specific texts. [Full Review]