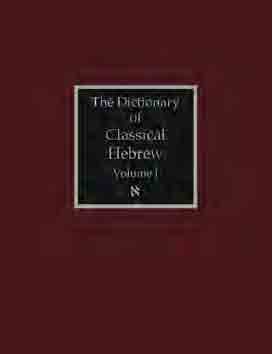 The Dictionary of Classical Hebrew: Volume I (Aleph)

Volume IX offers a valuable enhancement of the 8-volume Dictionary of Classical Hebrew (1993–2011).

In DCH I–VIII, each volume had its own English–Hebrew Index, but this volume presents a much improved gathering together of all those indexes. The Index here contains every word used as a translation (gloss) in the Dictionary, that is, all the words printed in bold. In addition—a feature not seen before in Hebrew dictionaries—beneath each listed word are noted all the Hebrew words it translates, together with the volume and page reference of the relevant article.

The Index thus shows at a glance all the Hebrew words that are translated with the same English word, e.g. Arrogance 10 Hebrew words, Arrow 7, Assembly 10, Band 9, Basket 9, Bend 10, Branch 23, Break 21. So it becomes an index of synonyms, hard to parallel elsewhere in the scholarly literature.

Indexes have not been a common feature of twentieth-century Hebrew dictionaries, though they were quite frequent in older lexica, and it is time they were restored as a customary element in a lexicon. Browsing the Index will prove not only interesting but also useful.

The second element in this volume is the Word Frequency Table. This is a combination of the Word Frequency Tables in the various volumes of DCH. There, the lists of word frequencies were arranged under each letter of the alphabet. In the present publication, all the words in the Dictionary are combined in a single list arranged in order of frequency of occurrence.

December 5, 2009 4.5 5
Six volumes have appeared. Designed for a contextual and usage approach to understanding the meaning of words. [Full Review]