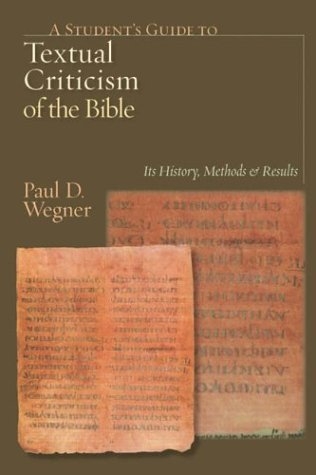 A Student's Guide to Textual Criticism of the Bible: Its History, Methods and Results

no reviews
4.5 out of 5 stars - 1 votes
WorldCat Google Amazon CBD Logos Bible Software
Pages 334
Publisher InterVarsity Press
Published 2006
ISBN-13 9780830827312
The Bible has been on a long historical journey since its original composition. Its texts have been copied and recopied. And despite the most careful and painstaking efforts of scribes and publishers down through the centuries, errors of one sort or another have crept in and have been reproduced. Sorting out the errors and determining the original wording is the task of textual criticism. In fact, the task of textual criticism is so daunting and detailed that it is divided between Old Testament textual critics and New Testament textual critics. That is why nearly every book on the subject focuses on the textual criticism of either the Old or New Testament. But if you are one of those interested in a general understanding of textual criticism, this book introduces you to textual criticism of the whole Bible--the Hebrew Old Testament and the Greek New Testament. In plain language and with ample illustration, Paul D. Wegner gives you an overview of the history and methods, aims and results of textual criticism. In the process you will gain an appreciation for the vast work that has been accomplished in preserving the text of Scripture and find a renewed confidence in its reliability.
Edit Book

4.5 out of 5 based on 1 user ratings
A Student's Guide to Textual Criticism of the Bible: Its History, Methods and Results Wegner, Paul D.
Denver Seminary Journal