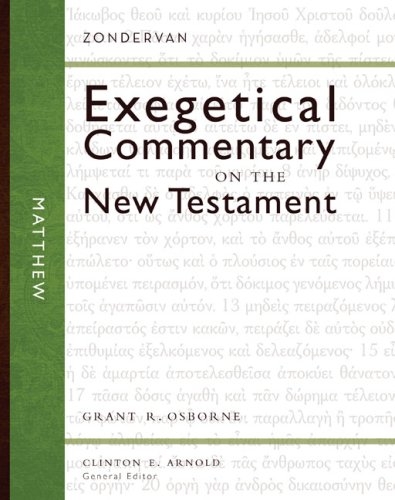 Designed for the pastor and Bible teacher, the Zondervan Exegetical Commentary on the New Testament examines the biblical text in its original environment. Notable evangelical scholars carefully attend to grammatical detail, literary context, rhetorical flow, theological nuance, and historical setting in their interpretation. Critical scholarship informs each step, but does not dominate the commentary, allowing readers to concentrate on the biblical author’s message as it unfolds. While primarily designed for those with a basic knowledge of biblical Greek, all who strive to understand and teach the New Testament will find this series beneficial. The general editor for this enterprising series is Clinton E. Arnold The following focused sections help readers understand the text: Literary Context: Explains how each passage functions within the book Main Idea: Summarizes the central message of the passage Translation in Graphic Layout: Presents a translation through a diagram that helps readers visualize the flow of thought within the text Exegetical Outline: Gives the overall structure of the passage Explanation of the Text: Provides interpretive insights into the background and meaning of the text Theology in Application: Discusses how the message of the text fits within the book itself and in a broader biblical-theological context, suggesting applications for the church today

September 29, 2016 5 5
Excellent commentary with very solid academic and exegetical input. One of the best commentaries on Matthew - not too technical but adequately balanced for the student and pastor or teacher of the Word.
R.Rudd

January 13, 2016 5 5
A thick must-have commentary on Matthew. Although not containing the same amount of comparative scholarly material as France, this commentary offers an insightful, rich perspective on many passages.
Steve

June 12, 2015 4 5
This is a commentary that I return to often. Although Osborne often does not always provide the depth of study that I'll receive from France, Hagner or Carson, he does offer a perspective that has helped me to penetrate many difficult texts. The exegetical outline is a very useful aspect of this volume and it is what I have often found to be the bridge between my exegesis and exposition. Well worth having
Abram K-J

March 17, 2014 4 5
A welcome guide for teaching and preaching through the first Gospel. Won't replace R.T. France's NICNT volume, but still a good one to have, in conjunction with others. See my full review at the following link. [Full Review]
Fred Sanders

May 28, 2011 4.9 5
I didn’t use this one as much because I didn’t get a copy until after the class had already started, and I had my study habits already too set to admit a fourth jumbo commentary. But I like the layout of this brand new series (can’t wait to read general editor Clint Arnold’s Ephesians volume), which takes you through the full text of the book repeatedly in each section. [Full Review]
Jason Kuo