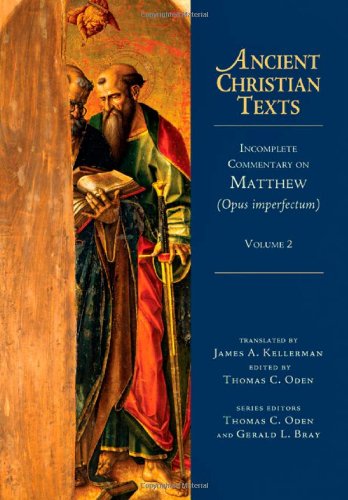 In the translator's introduction to this volume, James Kellerman relates the following story: As Thomas Aquinas was approaching Paris, a fellow traveler pointed out the lovely buildings gracing that city. Aquinas was impressed, to be sure, but he sighed and stated that he would rather have the complete Incomplete Commentary on Matthew than to be mayor of Paris itself. Thomas's affection for the work attests its great popularity during the Middle Ages, despite its significant missing parts--everything beyond the end of Matthew 25, with further gaps of Matthew 8:11--10:15 and 13:14--18:35. Although there are gaps, what remains is quite lengthy, so much so that we offer the work in two volumes, comprising fifty-four homilies. While the early-fifth-century author displays a few Arian propensities in a handful of passages, for the most part the commentary is moral in nature and therefore orthodox and generic. The unknown author, who for several centuries was thought to be John Chrysostom, follows the allegorizing method of the Alexandrians, but not by overlooking the literal meaning. His passion, above all, is to set forth the meaning of Matthew's Gospel for his readers. Here, for the first time, this ancient work is made available in English, ably translated by James A. Kellerman and edited by Thomas C. Oden.