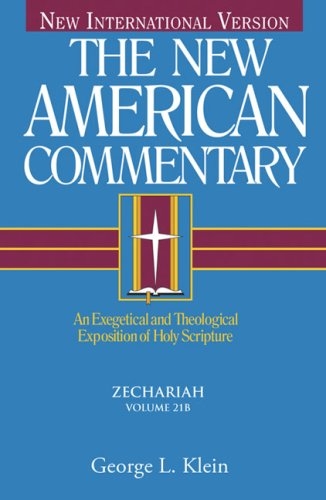 5 out of 5 based on 1 user ratings
Neal Piwowarski

April 17, 2010 5 5
George Klein has produced a fine installment to the NAC equalling the level of detail found in Douglas Stuart's Exodus volume. Although he favors a premillennial view, he presents various other differing interpretations and disagrees with them charitably. Thankfully, Klein's premillennial Dispensational (presumably 'progressive,' at least from my reading of the commentary as a whole) interpretations do not detract from this exceptional commentary. It can easily be used by those Reformed Christians who take a redemptive historical approach to their preaching and teaching. Klein exhibits a knowledge of systematic theology equal to that of OT exegesis. He fully interacts with recent Zechariah commentaries from Mark Boda (NIVAC) Carol and Eric Meyers (Yale Anchor Bible) as well as classic Zechariah commentaries from David Petersen (OTL) and Joyce Baldwin (TOTC). Also, the reader will notice frequent references to Eugene Merrill's commentary, but surprisingly enough, not for Dispensational purposes (Merrill himself commends this commentary on the front flap of the dust jacket). In short, one's exegesis of Zechariah is incomplete if it does not consult this volume. Non-Dispensationalists will quibble with some of Klein's comments and interpretative decisions, but his irenic, lucid writing style, illuminating word studies and thorough exegesis of the text compensate for that more than adequately. His handling of textual difficulties, such as those found in 2:8, is particularly impressive. He provides readers with an excellent survey of interpretative options when passages allow for them while likewise courageously defending one interpretation over against another, which is a real strength of this volume and commands the reader's respect even when one disagrees with him. This commentary is thoroughly conservative, Evangelical and, most importantly, Christocentric. This would be a strong contender for primary textbook if I were teaching an exegesis class on the book of Zechariah. Mark Boda and Douglas Stuart certainly have a worthy sparring partner to interact with in George Klein as they prepare their own upcoming technical commentaries on Zechariah for the NICOT and WBC respectively. Klein's Zechariah deserves a rightful place alongside other fine OT volumes in the NAC, such as Daniel Block's Judges and E. Ray Clendenen's Malachi. Amillennialists and Historic Premillennialists need not ignore this outstanding volume. It's not a defense of Premillennial Dispensationalism disguised as a commentary on Zechariah by any means. If the series editors go Premil with the Revelation commentary, they should commission a scholar similar in perspective to Klein to write it. It would at least appeal to a wider audience. This reviewer would be thrilled if Klein were to write a replacement volume on Daniel for the NAC, which is sorely needed.