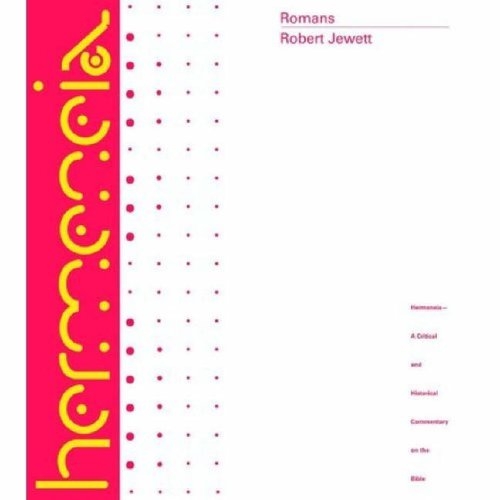 August 9, 2020 5 5
Had a copy of this commentary. It was exhaustive and self sufficient even for a deep study. Though quite technical, it can be adapted for devotional study with self input of the reader.
Paul

August 2, 2019 5 5
This is an exhaustive commentary that is now the new gold standard in the English language for scholarly depth. It argues that the point of Romans is to lay the groundwork for Paul's planned mission to Spain and that its main themes are an inversion of imperial Roman values (honour/shame, civilised vs barbarian) and practicing radical hospitality. Despite this very "non-theological" focus, Jewett's learning and exegetical skill mean that in many places he provides satisfying theological interpretation too.
Nijay Gupta

June 7, 2019 4.8 5
Famously, Jewett worked on this commentary for a quarter of a century. His expertise is in socio-historical contextualization of biblical texts. The series is critically acclaimed—and this volume is very important indeed—but pastors should know the Hermeneia series is self-described as non-confessional and does not generally take interest in modern application (though there are occasional exceptions). [Full Review]
Princeton Seminary

December 13, 2008 4.5 5
Hermeneia is a series for academics, hoping to bring the latest and best critical scholarship to bear fruit in interpretation. One thing that distinguishes this series from the ICC, which is, in my opinion, its main ‘competitor’, is that this series tends to focus heavily on rhetorical criticism. Jewett’s commentary is in that vein. It is not, though, exclusively a commentary on the rhetoric. It almost is a perfectly well rounded commentary, utilizing many tools to achieve its interpretation of the text.

Jewett gives, by far, the most helpful and most thorough background to Romans. It was not merely information for information’s sake. He did an excellent job of showing the impact of the background (especially the section on Spain) on the interpretation of the text.

The structural comments and discussion of rhetorical features was impeccable. Jewett was thorough and well argued. I appreciated this because it made his results testable. He then uses his rhetorical analysis to drive his exegesis.

No commentary on Romans is as thorough in textual criticism. Jewett attempted to give every single variant found in the manuscript tradition for Romans, his assessment of its originality, and what may have been the cause for the variant (e.g., scribal error, ideological alteration, etc.).

Jewett is also thorough on issues of grammar and lexicography, sometimes even more so than Cranfield. For a commentary whose focus isn’t on grammar, the amount of information you get is generous.

Jewett states that theologizing is not his goal in writing the commentary, and I understand that. That does not need to be the goal of the commentary. I feel at times, though, that his interpretation went astray because he did not consider the theological framework of the text. This led to an overly situational reading of Romans.

He could have done without using feminine pronouns to refer to God the Father.

I give Jewett 4.5 stars. The vast majority of the commentary is extremely helpful. As a technical aid to the text one could not find a better commentary (even Cranfield’s). If he had framed things a bit more theologically, it would have received a fill five stars. Pair it with Schreiner and you’ll be off to an excellent start in studying Paul’s letter to the Romans.

June 1, 2007 5 5
Minneapolis: Fortress, 2007. Pp. lxx + 1140. Hardcover. $90.00. ISBN 0800660846. James D. G. Dunn University of Durham Durham, United Kingdom Robert Jewett’s commentary on Romans is one of the finest to have appeared in modern times. Most commentators follow a similar pattern and, if truth be told, often simply take over source references and cross-references from their predecessors. Indeed, when writing a commentary on a text such as Romans, it can be a wearisome business having to trail through predecessor after predecessor all saying much the same thing, shifting the chairs round the table, and moving the bowl of flowers, but not much else! With Jewett’s commentary, however, one can be sure that nothing is secondhand. In the twenty or so years of working toward this great commentary he has approached the whole and the individual parts with a freshness that has often produced genuinely new material to help illuminate particular texts and that has brought a fine maturity of judgment to controverted points of exegesis. Even in surveys of earlier views and summaries of particular debates his writing has a sharpness of observation and critique that is never less than a stimulus and pleasure to engage. The double-column bibliography is thirty-six pages in length and the introduction more than ninety pages. It explains the approach taken (a sociohistorical and rhetorical commentary) and reviews in detail text-critical issues (he is skeptical of textual emendations) and the chronological and compositional circumstances (the letter was probably drafted in Corinth in the winter of 56–57 or the early spring of 57). Central to Jewett’s interpretation is his belief that Phoebe provided the necessary funds for the writing of the letter and delivered the letter to the congregations in Rome, to be read to them by Tertius, Phoebe’s scribe. The rhetoric of Romans (“evangelical persuasion,” “ambassadorial letter”) is considered in considerable detail. [Full Review]