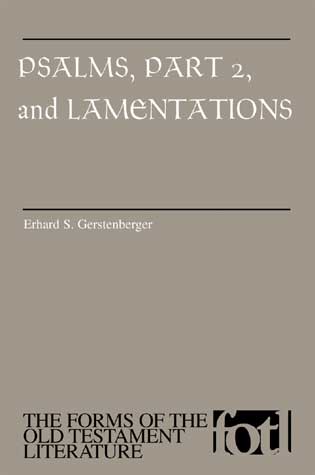 June 1, 2003 5 5
During the more than ten years after the publication of FOTL 14 (1988), the first part of Erhard S. Gerstenberger’s commentary on the Psalms, the scholarly community often inquired after the second volume. Hence it is grateful to hear the author say: “Here it is, finally” (xvi). The first volume proved to be a very useful and informed commentary on the Psalms (Pss 1–60), and the second one meets its expectations. The decade that passed since the publication of FOTL 14 evidenced a wide stream of literature on the Psalms and several new approaches to ancient Hebrew poetry. Gerstenberger admits that he has learned much from the new avenues of Psalm exegesis starting in the 1990s. However, he also remains true to his principles, and one can clearly agree with his statement in the preface: “I still think that a form-critical and social-historical analysis like the one begun with FOTL XIV may be helpful to recognize the multiple roots of psalmody in different types of human organization and ritual practice” (xv). [Full Review]