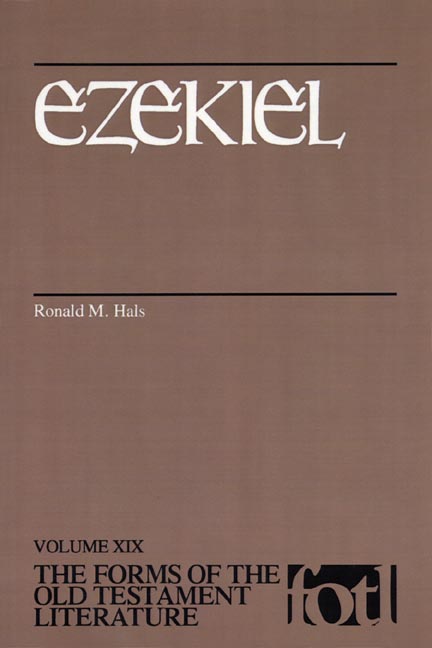 Ezekiel is Volume XIX of The Forms of the Old Testament Literature, a series that aims to present a form-critical analysis of every book and each unit in the Hebrew Bible. Fundamentally exegetical, the FOTL volumes examine the structure, genre, setting, and intention of the biblical literature in question. They also study the history behind the form-critical discussion of the material, attempt to bring consistency to the terminology for the genres and formulas of the biblical literature, and expose the exegetical process so as to enable students and pastors to engage in their own analysis and interpretation of the Old Testament texts. Ronald M. Hals’s commentary analyzes in detail the structure and intention of the unusually long prophecies of Ezekiel. Because this prophet genuinely qualifies for the designation “theologian,” Hals devotes much attention to the examining Ezekiel’s theological perspective and style. He argues that Ezekiel, despite his proclamations of judgment, is not a prophet of despair. Rather, Ezekiel affirms the stubborn grace of Israel’s sovereign Lord — the God who follows his people into the death of exile and loss of nationhood and promises them life out of death via a new exodus, a new peoplehood, and a new temple. Hals’s examination of the dominantly negative shape of almost all of Ezekiel’s promises — expressed as the undoing of past evil — leads him to abandon the common attempt by commentators to ferret out (especially from chapters 40–48) a basis for the historical reconstruction of the priesthood.