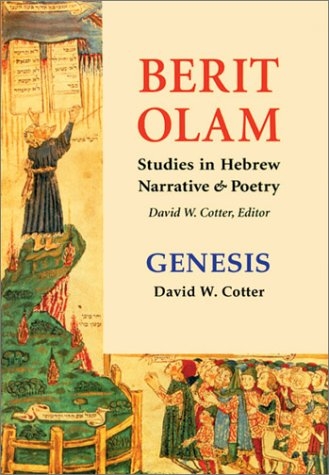 The central thesis underlying this study of Genesis is that the God who is revealed as a character in Genesis is always a savior. In Genesis, David Cotter, OSB, helps readers discern a structure in the book whereby the least and the weakest are the object of God's saving help.

Genesis begins with an introduction to the methodology that is used throughout the book. The introductory essay deals with the theory of Hebrew narrative and the challenges posed to biblical exegesis by contemporary literary theory.

The theme of the commentary itself is that the God who is revealed as a character in Genesis is always a savior. This is true in the Stories About Beginnings (Genesis 1-11) and the Stories About the Troubled Family Chosen for Blessing (Genesis 12-50). The Egyptian slave Hagar, not Abraham, is read as the central figure of the familys first generation and Tamar, the cast-off daughter-in-law as the moral center of the fourth generation. God is savior above all for those whose need is greatest.

May 1, 2004 5 5
Collegeville, Minn.: Liturgical Press, 2003. Pp. xxxviii + 366. Hardcover. $49.95. ISBN 0814650406. David G. Graves Trinity Evangelical Divinity School Deerfield, IL 60015 Berit Olam, of which David W. Cotter serves as the editor, is intended to be a religious series, a point Cotter is aware will be viewed with ambivalence by some (xviixviii). Each of the contributors to the series is to write from his or her own confessional stance. In Cotters case that is as a Benedictine Monk (xvi). His introduction lacks many of the traditional features found in the introductions to modern Genesis commentaries, such as a section on the date of composition, sources, or authorship. Cotter maintains that Genesis should not be read in isolation from other commentaries, as it will not answer all of the questions that readers might have; therefore he suggests that one also read the standard historical-critical commentaries along with it. In place of those standard entries in the introduction, Cotter explicates the rationale behind his methodology. He argues for a situated reading that is suggestive, not definitive. In order to explain what he means by a situated reading, Cotter uses the illustration of looking at Michelangelos David. Each view will yield a different interpretation, and each view is a legitimate interpretation based on the individuals perspective. Because of this conviction Cotter explains some of the effects his Benedictine perspective will have on his reading of the book of Genesis. He asserts that the book of Genesis is a religious book, and any reading that fails to take this into account misses the intent of the book. He utilizes a tripartite schema to read the Scriptures. [Full Review]
Review of Biblical Literature (RBL) (David L Petersen)

April 1, 2004 5 5
Collegeville, Minn.: Liturgical Press, 2003. Pp. xxxviii + 366. Hardcover. $49.95. ISBN 0814650406. David L. Petersen Candler School of Theology, Emory University Atlanta, GA 30322 David Cotter, general editor of the Berit Olam series, has offered that series commentary on Genesis. One hallmark of the series is its focus on the final form of the text, which has been construed as the Masoretic Text. Another hallmark is a thoroughgoing literary approach. In an interesting, though unusual, methodological prolegomenon, Cotter appeals to two experiences in art museums, one in which he viewed Michelangelo’s David from diverse angles, the other in which he examined eighteenth-century porcelain miniatures. The former experience elicits a comment about the vantage point from which Cotter views a biblical text, namely, from various perspectives; the latter generates an analogy for careful viewing of literary miniatures. As for the former, Cotter is guided by his religious identity, as a Benedictine monk, who is guided by both Dei verbum and the Benedictine practice of lectio divina and influenced by ancient and modern interpretive traditions, both inside and outside the Roman Catholic Church. And as for the later, Cotter proposes to apply the tools of narrative analysis to the book as an integral whole (xxiv). In so doing, he identifies the critical literary features that he will examine (plot, structure, characterization, point of view). [Full Review]