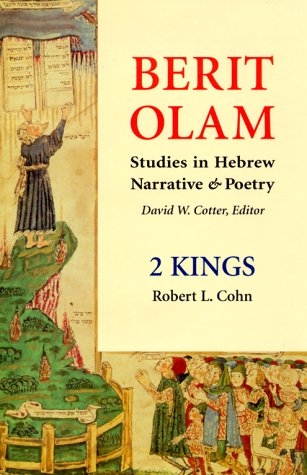 Opening with the prophet Elijah's ascent into heaven and closing with the people of Judah's descent to Babylonia, 2 Kings charts the story of the two Israelite kingdoms until their destruction. This commentary unfolds the literary dimensions of 2 Kings, analyzes the strategies through which its words create a world of meaning, and examines the book's tales of prophets, political intrigue, royal apostasy, and religious reform as components of larger patterns.

2 Kings pays attention to the writers' methods of representing human character and of twisting chronological time for literary purposes. It also shows how the contests between kings and prophets are mirrored in the competing structures of regnal synchronization and prophecy-fulfillment. Much more than a common chronicle of royal achievements and disasters, 2 Kings emerges as a powerful history that creates memories and forges identities for its Jewish readers.

January 1, 2005 5 5
The dust jacket of this compact volume identifies the intent of the Berit Olam (Everlasting Covenant) commentary series: to bring to all interested in the Bible, be they lay people, professional biblical scholars, students, or religious educators, the latest developments in the literary analysis of these ancient texts. Conse quently, the readings of the books of the Hebrew Bible offered here all focus on the final form of the texts, approaching them as literary works, recognizing that the craft of poetry and storytelling that the ancient Hebrew world provided can be found in them and that their truth can be better appreciated with a fuller understanding of that art. This is an admirable, needed, and difficult objective. The fellowship of pro fessional biblical scholars has not always communicated effectively, or at all, with the Bibles many other audiences, who, not surprisingly, often suspect us of much mischief (e.g., the derision that the Jesus Seminar elicits when featured in mainstream news magazines). Cohns reading of 2 Kings suits the series and largely meets its objectives; it is a worthy companion to Jerome T. Walshs excellent reading of 1 Kings (1996) in the same series (for a review of the latter work, see http://bookreviews.org/bookdetail.asp?TitleId=2281&CodePage=2281,1685,3982,1419,1298). [Full Review]