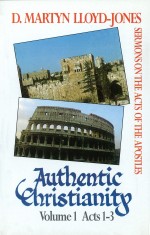 This is the first of a series of volumes which bring together Dr Lloyd-­Jones’ preaching from the Acts of the Apostles. It covers texts from the first three chapters in the book which, he claimed, presented ‘authentic Christianity and nothing else.’ The Doctor was aware of how much people need ‘to know exactly what Christianity is and what the Christian church is.’ Just as many in the first century AD looked towards Jerusalem or Rome for answers to life’s problems, so people in our own time also look in the wrong direction and need to be directed to the only source of real help. The message of Christianity is ‘Jesus and the resurrection’. The church in the Acts of the Apostles was prepared to live for this and die in it. Dr Lloyd-Jones constantly directs the reader to the same Saviour and the same life.