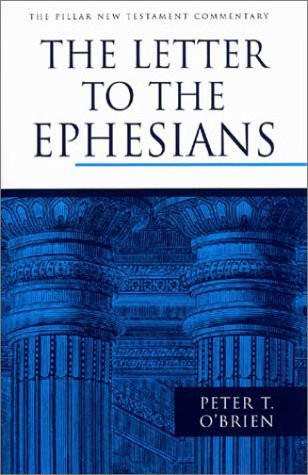 Now out of print as withdrawn by publisher
see statement: http://eerdword.com/2016/08/15/eerdmans-statement-on-three-new-testament-commentaries/

April 11, 2016 3 5
I was rather disappointed in this one. It's too one dimensional, lacking engagement with other perspectives. I had hoped for a lot more from O'Brien, especially having worked with his Philippians (NIGTC) and Colossians/Philemon (WBC) commentaries.
JD

August 5, 2015 5 5
O'Brien is a top-notch scholar. This volume is complete and scholarly, yet very accessible and readable.
Jason Stewart

July 28, 2015 5 5
Peter O'Brien has done a fantastic job with this epistle. I found it to be a very helpful aid to my sermon prep.
Tim Challies

July 15, 2013 5 5
There is clear consensus among the commentators on the commentaries that if you are going to purchase just one volume on Ephesians, it ought to be O’Brien’s contribution to the Pillar series. Carson commends O’Brien by saying, “He has thoughtfully absorbed and filtered the best material from earlier commentaries, but has made his own contribution by sticking close to the text, tracing out the theological argument with care and precision.” Derek Thomas says it is “a masterful work” while Keith Mathison says it “should be on the desk of every student of Scripture.” [Full Review]
Phillip J. Long

June 19, 2012 4.8 5
O’Brien has written major commentaries on each of the Prison Epistles for different series (NIGTC, WBC) and has contributed much to the study of Paul in recent years. His introduction to Ephesians is more brief than others on this list, but it is quite efficient. He defends a traditional view of Pauline authorship, pointing out that the problems created by pseudonymity are quite difficult, perhaps more so than the problems associated with Pauline authorship. The body of the commentary is based on the English text with Greek commentary relegated to the footnotes, as is the style of the Pillar series. This makes for a readable commentary which will be very helpful for the busy pastor or student preparing to preach the text of Ephesians. [Full Review]
Mark Heath

March 5, 2010 5 5
An excellent and thorough commentary, including a robust defense of Pauline authorship. He notionally commentates on the NIV text, but doesn't always agree with the translation decisions. Ideal for those preaching or wanting to do in depth Bible study on Ephesians [Full Review]
Ligonier Ministries (Keith Mathison)

December 13, 2008 5 5
When it comes to the so-called prison epistles of Paul, the commentaries of Peter O'Brien are the place to begin. He has written the best commentaries on Colossians & Philemon (WBC), Philippians (NIGTC), and Ephesians. This commentary in the Pillar series in the most accessible of the three works. O'Brien engages thoroughly and carefully with the text, providing numerous insights along the way. This commentary should be on the desk of every student of Scripture. [Full Review]
Derek Thomas

August 24, 2008 5 5
The Pillar New Testament Commentary is written with pastors in mind. As the series editor, Carson has attempted to draw from the top scholars from all over the world to help pastors wade through issues of background, grammar, lexicology, textual criticism, and literary/rhetorical style while keeping the homiletical task in mind. That can be a formidable task when writing a commentary on Ephesians, but Carson selected one of the best in Peter T. O’Brien, who did not disappoint.

O’Brien does an excellent job of drawing from other scholars who previously written or commented on the book (especially Lincoln, Bruce, and Clinton Arnold). He seems to take the best from each without getting sucked into their weak points. It is not a commentary on commentaries, however. O’Brien frequently picks up others’ arguments and advances them much further and more coherently than they ever did.

O’Brien’s defense of Pauline authorship is formidable. I especially appreciate the way he handled the section on the alleged use of Colossians by Ephesians. It certainly is not a straightforward dependence, if there is any.

He also seems to know what pastors need in a commentary. Some commentaries major in lexicology (e.g., Quinn and Wacker on the Pastorals); others in background issues and rhetorical analysis (e.g., Ben Witherington on anything); other still in issues of grammar (e.g., Cranfield on Romans). While all of this information is extremely valuable, often times pastors don’t have time to read a half dozen commentaries to ‘get a bit of this and a bit of that.’ O’Brien does a good job of drawing on the most relevant information from different approaches to the text providing the busy pastor with the closest you can come to a one stop shop.

In agreement with what other reviewers have said, O’Brien is very theologically astute. He understands the implications of his well nuanced positions very clearly. His work on chapter 2 is perhaps the best I have seen by any commentator on any chapter of scripture (although his work on Philippians 2 is also outstanding). It’s clear, thorough, impacting, well supported, and follows the flow of the text beautifully. If there is one weakness I frequently see in commentators, it is that they fail to see how their argument fits into the whole letter. This does not happen to O’Brien.

Also, the section on the armor of God was always a bit enigmatic to me. I did not see before why Paul would ever end his epistle with it. O’Brien’s explanation of how it fit within the wider purposes of Ephesians was very helpful.

I wish O’Brien had done his own translation of the text. Looking at the scholar’s translation up front serves as a quick summary of the conclusions they draw through their exegesis. Also it sometimes helps you more fully grasp their arguments.

This is minor, but I would have liked a more formidable defense of ‘shod your feet with the preparation of the gospel of peace’ being interpreted as a call to missionary activity. It is not an impossible interpretation, but it does not seem to me to be an obvious one.

O’Brien’s commentary is outstanding. I cannot more wholeheartedly recommend it. His writing is powerful, clear, and concise, and his analysis incisive; making him eminently quotable. This commentary stands head and shoulders above the rest.

August 3, 2008 5 5
O'Brien is the easiest to read of the best Ephesians commentaries. He uses Greek font. It annoys me to no end when someone transliterates the original language without using the original font at least in footnotes, unless the intended audience is exclusively popular level. O'Brien was forced to transliterate in the main text due to the format of the series, but he insisted on using real Greek text in the footnotes. That's ideal when a commentary's audience will include people with good Greek skills and people with no or not very good Greek. I can therefore recommend O'Brien to more people than some of the others in the list. I also think he exercises at least slightly better judgment about the basic meaning of the text than some of the others whose commentaries still qualify among the best. He's thoroughly mined all the major commentaries and has filtered out what's most crucial for interpreting the text accurately, but his exegesis and exposition derives directly from the text. [Full Review]
Brian LeStourgeon

July 31, 2008 5 5
Interesting, engaging, erudite, cogent. Concerned with textual meaning and useful expositionally. This is the best commentary on Ephesians.
PastorJustin