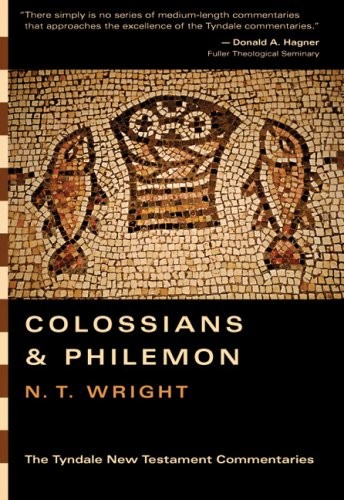 February 14, 2021 5 5
This is my first time reading NT Wright and his mix of insight, attractive writing style, and preaching made this one of the best of the Tyndale Commentaries for me as it informed me and caused me to desire God more deeply which was unexpected in a commentary. Colossians is the bulk of the volume. The intro mostly covers when and where the letter was written and who Paul was opposing. NT Wright believes this to be the Jews while I tend to think it was Judiazers, Pharisees who came to Christ yet still wanted Judaism, though in the end the difference is rather small. The author's opinions do run counter to some other positions, but I think he defends them well. The Commentary portion is fairly deep for an intro commentary but written simply enough to understand. I read it more slowly than some others in the Tyndale line but also profited more, so a fair trade-off. Philemon is more of an add-on though a solid little work where the author sees Paul as being Christ-like as a connection between Paul Philemon.
Tom Vaughan

May 14, 2019 5 5
I recently preached a series on Colossians and found N.T. Wright's commentary by far the most helpful when it came to a meaningful exposition of the text. I felt that, while other commentaries often jumped to conclusions with the passages I was studying, Wright offered a simple exposition that was rooted in the history of the text. This really helped me understand the main thrust of what Paul meant when he wrote these letters 2,000 years ago. I'm by no means proficient in Greek, so appreciated how Wright explained the various definitions of Greek words. If you want a solid commentary on Colossians, then I would thoroughly recommend this book.
N. Roland

August 10, 2012 5 5
N.T. Wright's commentary on Colossians is exactly what a commentary in the Tyndale series should be. It is concise and yet covers the necessary material. Wright covers a lot of ground in very few words. He argues that there is no good reason to reject Pauline authorship. He argues that Colossians is not a polemic against gnostic syncretism but is rather a polemic against Judaism. At first I was not convinced, however Dunn's commentary pushed me more in this direction. Wright handles the difficult sections well. His literary analysis of 1:15-20 is especially helpful and clear. He has several moments of warm, pastoral application. I found this volume to be a perfect companion to a more technical commentary like O'Brien or Dunn. It is also the first commentary I put in the hands of a lay person wanting some help with Colossians. [Full Review]
Phillip J. Long

June 26, 2012 4.9 5
The Tyndale series has been around for many years, Wright’s little commentary replaces 1960 Tyndale commentary by Herbert Carson. At only 192 pages, Wright’s commentary is brief, yet extremely helpful. The style is stimulating to read and will be helpful for any pastor or teaching preparing a sermon on Colossians. As expected, Wright has a fairly unique view of the Colossian heresy. He thinks that Paul is writing against the same sort of Judaizers he encountered in Galatia, considering Judaism as if it was just another philosophy in the marketplace of ideas of first-century Colossae. (This approach is similar to Dunn’s, Wright’s commentary pre-dates Dunn by a decade). This observation allows Wright to read the letter with the lens of the New Perspective on Paul (pages 24-30 make this point clear). As the commentary progresses, Wright consistently highlight’s Paul’s polemic against Judaism, as opposed to other suggested sources. The commentary is on the English text with occasional Greek appearing in transliteration. There is awareness of other scholarship, but the style of the commentary limits interaction with other commentaries. [Full Review]
Mark Heath

April 8, 2010 5 5
Outstanding contribution to this series. Wright is always interesting, and brings a fresh perspective to most subjects he touches on. His take on the false teaching in Colosse being Judaism will not convince everyone. Particularly useful to preachers, as he makes great points of application along the way. [Full Review]
Marcus Maher

November 14, 2009 4.5 5
The Tyndale series is a little unique in that it primarily seeks to lay out the original meaning of the text but is geared towards the laity. Hence, I usually skip it, because there are other commentaries out there that do the same thing (lay out he original meaning) but at much more depth. Sometimes, though, the author of the commentary is so good that you have to read it, even though it will probably be a bit sparse for your liking. That is the case with N.T. Wright on Philemon. One thing that surprised me, is that I didn't find myself desiring a lot more detail, but perhaps this should not have been a surprise. N.T. Wright is known for doing a lot in a short space. There also were times where he simply said things better than anyone else did, such as in his comments on vs. 17-20. I highly recommend this commentary as well, especially to any lay person studying Philemon. 4.5 stars out of 5. [Full Review]
R. Hansen

February 21, 2009 5 5
This is a great commentary. Every paragraph gets you thinking in new ways. You are aware that each paragraph could turn into a whole chapter if pursued. But unlike some short commentaries which just never say enough, Wright packs a ton in each sentence so that you go away pursuing all kinds of new thoughts. This is what a short commentary should do – not explain everything but make you approach the text with new insights. Though no doubt the serious student will want to supplement this commentary with a longer more detailed one which will discuss matters Wright does not, this should certainly be a part of your study. It is good for the serious student, the pastor, or just one who wants to learn Colossians better. Admittedly, for those who are not so used to Wright and reading the Old Testament as story, some of these thoughts may be a little challenging to grasp at first (they were for me), but it is worth the effort and I think the more one studies Colossians, the more his insights will become meaningful. It is deep but not technical. He believes that the main opponents of the Colossian church are Jews who are trying to convince these new Christians to follow Torah and adopt Jewish customs to know that they are truly included in God's people.
John Glynn