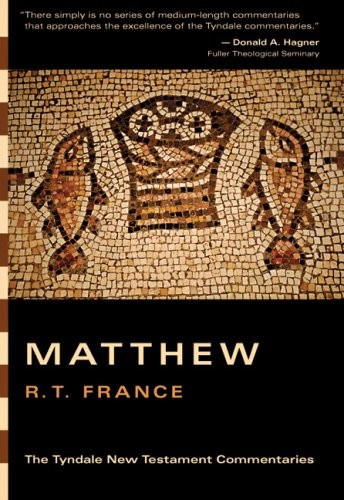 5 out of 5 based on 2 user ratings
bigcat

July 6, 2020 5 5
As with most of the commentaries in this set, the introduction was well done. The things you want to know about Matthew such as structure, the high regard with which this Gospel was held by the early church, the frequent use of Old Testament references, and much more are covered briefly but in some depth. It is the commentary itself where this book really shines. Dr. France manages to be academic, instructional, and devotional at the same time. While not everyone will agree with him, his belief that Christ's words are intended to create discipleship in believers rather than simply as ethical statements both instructed and convicted me. When you need to understand a word or a concept, he can dig in, but he also has a pastor's flair for applying Jesus' words to where we live.
BRathbun

October 14, 2019 5 5
Like Morris, France is such a good commentator, that he excels in the intro level tyndale series as well as larger, more technical works. This one may be better than some larger works, sharp exegete!