The Message of Colossians & Philemon 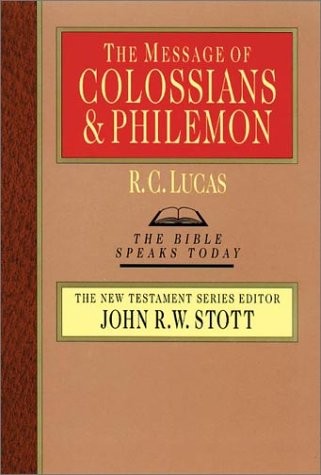 Fullness and freedom--two aspects of Christian life that we all want to share. Paul wrote about them at length (and depth) in his letter to the Christians at Colossae, where certain new teachers were proclaiming that "mere Christianity" is not enough. There is, they suggested, a fuller experience, a greater liberation, than they had so far enjoyed. But Paul was adamant: all God's fullness is in Christ alone, and only through his complete work are we set free.These are the great objective truths of the faith that Dick Lucas highlights in his exposition, enabling us to see both the riches that are ours in Christ and the irrelevance--even blasphemy--of all would-be improvements on what God has done.

August 12, 2013 5 5
Lucas’ contribution to The Bible Speaks Today series fits my criteria in always wanting to include one commentary geared toward the general or devotional reader. This one may not provide as much fodder for sermon prep, but will be useful to those reading for personal purposes. Jim Rosscup says this work “is not a ‘commentary’ but an accurate, readable exposition keyed to practical life.” [Full Review]
Ligonier Ministries (Keith Mathison)

February 23, 2009 4 5
Lucas's commentary on Colossians and Philemon is probably the best introductory level commentary on these two books. Like all of the commentaries in this series, it emphasizes the big picture and the overall flow of the text. [Full Review]
Denver Seminary NT Bibliography