Fallen Angels and the History of Judaism and Christianity: The Reception of Enochic Literature

Fallen Angels and the History of Judaism and Christianity: The Reception of Enochic Literature Annette Yoshiko Reed 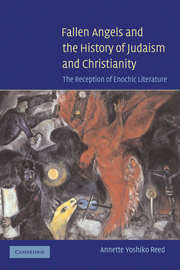 This book considers the early history of Jewish-Christian relations focussing on traditions about the fallen angels. In the Book of the Watchers, an Enochic apocalypse from the third century BCE, the 'sons of God' of Gen 6:1–4 are accused of corrupting humankind through their teachings of metalworking, cosmetology, magic, and divination. By tracing the transformations of this motif in Second Temple, Rabbinic, and early medieval Judaism and early, late antique, and Byzantine Christianity, this book sheds light on the history of interpretation of Genesis, the changing status of Enochic literature, and the place of parabiblical texts and traditions in the interchange between Jews and Christians in Late Antiquity and the early Middle Ages. In the process, it explores issues such as the role of text-selection in the delineation of community boundaries and the development of early Jewish and Christian ideas about the origins of evil on the earth.