Has Archaeology Buried the Bible? 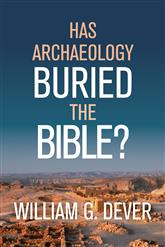 Bringing the Bible and ancient Israel into a new and brighter light.

In the last twenty years, archaeological evidence has dramatically illuminated ancient Israel, particularly its religion. However, instead of proving the truth of the Bible, as an earlier generation had confidently predicted, the new discoveries have forced us to revise much of what was thought to be biblical truth.

The new data provokes an urgent question: If the biblical stories are not always true historically, what, if anything, is still salvageable of the Bible’s ethical and moral values? In a postmodern age much of the Western cultural tradition, resting on the biblical worldview, is being challenged.

The Bible, read with a critical and discerning mind, can help us to do right in this world—and archaeology may be the best tool for the task of bringing to light the ethical value of the Bible. Has Archaeology Buried the Bible? simplifies the complex issues and summarizes the new, archaeologically attested ancient Israel, period by period (ca. 1200–600 BCE). But it also explores in detail how a modern, critical reader of the Bible can still find relevant truths by which to live.