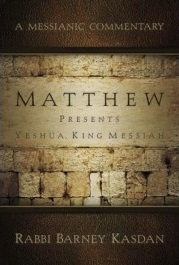 If you’ve ever wanted to get to know Yeshua, the Jewish Messiah, the Good News of Matthew is the best place to start. Yet, few commentators are able to truly present Yeshua in his Jewish context. Most don’t understand his background, his family, even his religion, and consequently really don’t understand who he really is. That may sound strange, but in order to provide the historical and cultural setting of his day, a commentator needs to be well versed with first-century Jewish practices and thought, not the least of which are the “traditions of the Elders” that Yeshua so often spoke about. Fortunately, we have a commentator who understands the Jewish Jesus and his connection to the rabbinical ways of his day. Barney Kasdan has been rabbi of a vibrant Messianic synagogue, Kehilat Ariel in San Diego, since 1981. A graduate of Biola University and Talbot Seminary, as well as a student at the University of Judaism, he brings a wealth of knowledge and information to us. Author of two other books, God’s Appointed Times and God’s Appointed Customs, Rabbi Kasdan is dedicated to helping both Jews and Gentiles get to know the Jewish Yeshua better. 448 pages, chapter by chapter commentary.