The Lion of Princeton: B.B. Warfield as Apologist and Theologian

The Lion of Princeton: B.B. Warfield as Apologist and Theologian Kim Riddlebarger 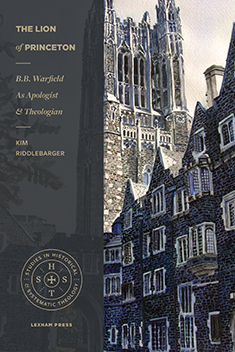 There’s little doubt about the impact B.B. Warfield has had on American Christianity. Some hail him for his apologetic and polemical skills, praising him as a defender of Reformed orthodoxy. Others view him with less regard—as too focused on the role of reason in faith and too devoted to the inerrancy of Scripture. But all agree that he is a man with whom one must reckon.

Despite the resurging interest in his life and work, Warfield’s views are often misunderstood. In The Lion of Princeton, Kim Riddlebarger investigates Warfield’s theological, apologetical, and polemical writings, bringing clarity to the confusion that surrounds this key figure of the Princeton tradition.

Riddlebarger provides a biographical overview of Warfield’s life and traces the growing appreciation for Warfield’s thought by contemporary Reformed thinkers. Furthermore, he evaluates the fundamental structures in Warfield’s overall theology and examines Warfield’s work in the field of systematic theology.

Warfield’s theological heirs revere his memory, while his critics continue to find his work misguided and his legacy troubling. “The Lion of Princeton,” as he was known, was certainly up for the challenge. We must therefore take a fresh look at the work of this great scholar, who was in many ways the most significant American apologist, polemicist, and theologian of his age.