Doing Things with Words in the First Christian Century 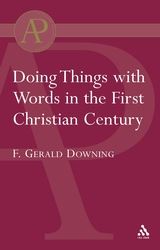 Although its religious heritage was that of a variegated Judaism, the tiny early Christian movement was nevertheless much more complexly and richly linked with the Graeco-Roman world in which it came to birth than is usually allowed for. In particular, 'ordinary' people were capable of a sophisticated use of words that can be detected also in the New Testament writings. But the use of words in Graeco-Roman times was often very different from what we suppose, and this collection of studies attempts to identify some of the anachronisms that still pervade even the best of modern scholarship.