The Epistle of James and Eschatology: Re-reading an Ancient Christian Letter 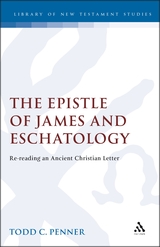 The aim of this book is to challenge the common view that the epistle of James is a late Hellenistic Wisdom document that has little importance for our understanding of earliest Christianity. The author undertakes two main projects: first, an examination of the various assumptions about date, setting and content that have influenced how the letter of James has been interpreted; and second, a re-reading of the letter that seeks to uncover the special character of the epistle by stressing the fusion of its eschatological framework with its ethical instruction. The literary, cultural, and social contextualization of James that emerges sheds new light on this often neglected text and its place in early Christianity.