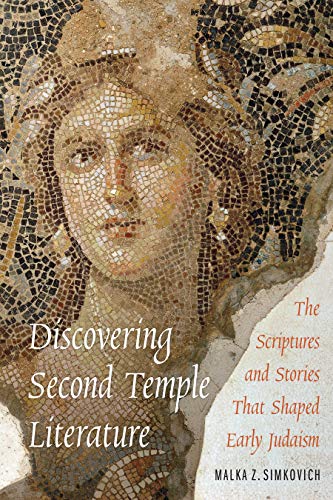 Exploring the world of the Second Temple period (539 BCE–70 CE), in particular the vastly diverse stories, commentaries, and other documents written by Jews during the last three centuries of this period, Malka Z. Simkovich takes us to Jerusalem, Alexandria, and Antioch, to the Jewish sectarians and the Roman-Jewish historian Josephus, to the genizah in Cairo and the ancient caves that for centuries kept the secrets of the Dead Sea Scrolls. As she recounts the history of Judaism during this vibrant time, she presents samplings of some of the period’s most important works and analyzes them for both known and possible meanings—illuminating the perspectives of Jewish writers, leaders, and readers in this formative era.

This book interweaves past and present in four parts. Part One tells modern stories of discovery of Second Temple literature: caches of ancient Jewish manuscripts in unearthed in synagogues, churches, even caves in isolated regions of the Judaean desert – regions that lay almost entirely unexplored for thousands of years. Part Two describes the Jewish communities that flourished both in the Land of Israel and in the Diaspora.  Part Three explores the lives, worldviews, and significant writings of Second Temple authors. Part Four examines how authors of the time introduced novel, rewritten and/or expanded versions of Bible stories in hopes of imparting messages to the people.

Simkovich’s “popular archaeology” style will engage readers in understanding the remarkably creative ways Jews at this time chose to practice their religion and interpret its scriptures in light of a cultural setting so unlike that of their Israelite forefathers. Like many modern Jews today, they made an ancient religion meaningful in an ever-changing world.