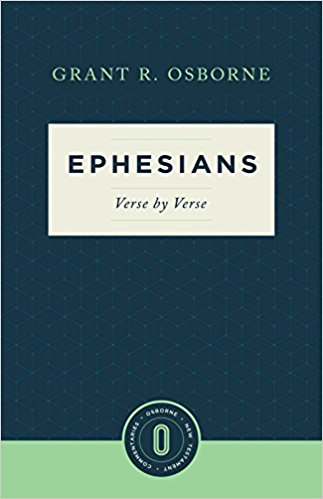 While he was in prison, Paul wrote a letter to the Ephesian Christians whose magnificent themes have echoed throughout the centuries: the exaltation of Christ, the church as his body, believers as his new creation, and his defeat of the cosmic powers that opposed him. Throughout, he makes clear that everything we are and have is ours only "in Christ."

In Ephesians Verse by Verse, Grant R. Osborne offers a clear exposition of this letter that takes seriously both its first--century context and what it means for us today. Pastors, Bible study leaders, and invested laypeople will all benefit from Osborne's careful reading of the text and commitment to making sense of the New Testament without scholarly jargon.

The Osborne New Testament Commentary Series is a set of commentaries on every New Testament book. In each volume, Grant R. Osborne seeks to carefully exposit the text in plain language, bringing out the treasures in each book and making them accessible for today's readers.