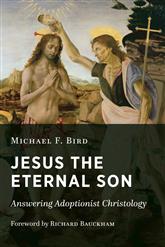 Adoptionism—the idea that Jesus is portrayed in the Bible as a human figure who was adopted as God's son at his baptism or resurrection—has been commonly accepted in much recent scholarship as the earliest explanation of Jesus's divine status. In this book Michael Bird draws that view into question with a thorough examination of pre-Pauline materials, the Gospel of Mark, and patristic sources.

Engaging critically with Bart Ehrman, James Dunn, and other scholars, Bird demonstrates that a full-fledged adoptionist Christology did not emerge until the late second century. As he delves into passages often used to support the idea of an early adoptionist Christology, including Romans 1:3–4 and portions of the speeches in Acts, Bird persuasively argues that early Christology was in fact incarnational, not adoptionist. He concludes by surveying and critiquing notable examples of adoptionism in modern theology.