The Five Fragments of the Apocryphon of Ezekiel: A Critical Study

The Five Fragments of the Apocryphon of Ezekiel: A Critical Study James R. Mueller 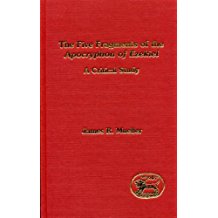 This book is the first full presentation of the 'Apocryphon of Ezekiel', the name given to five fragmentary apocryphal texts attributed to the prophet Ezekiel, and preserved only in quotations by early Christian writers and one of the Chester Beatty papyri. After a brief introduction to the apocryphon and many other Ezekiel traditions of early Judaism, including the partially published Second Ezekiel material from Qumran, the history of research on the Apocryphon as a whole and on each of the fragments is detailed. The body of the book consists of the presentation of each of the witnesses to the five fragments, along with a discussion of the transmission history of each saying. The final chapter makes the case for the existence of a Jewish Apocryphon of Ezekiel which was composed in either Greek or Hebrew around the turn of the era, and which was known, and quoted, by several early Christian writers. This monograph thus provides scholars of Early Judaism and Early Christianity with another important witness for the reconstruction of the wide variety of Early Jewish thought, and for understanding the continuing influence and appropriation of Jewish apocryphal traditions in the Early Christian world.