Rewriting the Testament of Solomon: Tradition, Conflict and Identity in a Late Antique Pseudepigraphon 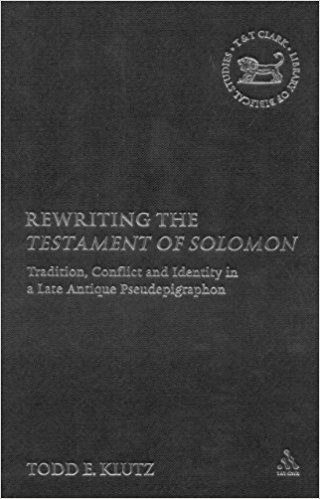 Todd Klutz examines the main issues in scholarship on the Testament of Solomon, for instance, the Testament's textual identity and its tradition history. By approaching them in the light of new thinking about 'magic' and the structure of texts, he sheds light on the motivations behind its final redaction and the sorts of discourses to which its composition may have been a response. Klutz also argues that the Colbert manuscript ('P') is unparalleled in value for providing clues to the Testament's literary sources and tradition history. Focusing special attention on the structure and dominant motifs of 'P', he identifies a previously unnoticed scheme of astrological motifs. Most notably, Klutz argues that the final stage of the text's editing included the composition of chapters 19-26, whose existence as part of the larger Testament is presupposed in an early (i.e. second or third c. CE) source found in the Dialogue of Timothy and Aquila, and whose primary aim is to undermine the contemporaneous reputation of Solomon as the origin of a powerful tradition of magico-religious health care.