The Birth of Christian History: Memory and Time from Mark to Luke-Acts

The Birth of Christian History: Memory and Time from Mark to Luke-Acts Eve-Marie Becker 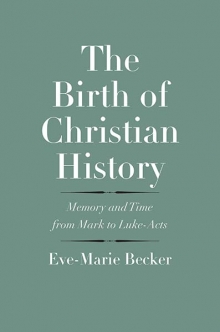 The first comprehensive account to explore the beginnings of early Christian history writing, tracing its origin to the Gospel of Mark and Luke-Acts

When the Gospel writings were first produced, Christian thinking was already cognizant of its relationship to ancient memorial cultures and history-writing traditions. Yet, little has been written about exactly what shaped the development of early Christian literary memory. In this eye-opening new study, Eve-Marie Becker explores the diverse ways in which history was written according to the Hellenistic literary tradition, focusing specifically on the time during which the New Testament writings came into being: from the mid-first century until the early second century CE.

While acknowledging cases of historical awareness in other New Testament writings, Becker traces the origins of this historiographical approach to the Gospel of Mark and Luke-Acts. Offering a bold new framework, Becker shows how the earliest Christian writings shaped “Christian” thinking and writing about history.