The Oxford Encyclopedia of the Bible and Archaeology

The Oxford Encyclopedia of the Bible and Archaeology 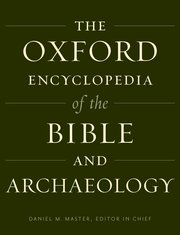 The connection between archaeology and the Bible was forged by the discoveries of the nineteenth century, and archaeological finds became the primary catalyst for changes in biblical studies throughout the twentieth century. A distinct subfield, Biblical Archaeology as conceived by William Albright, arose to cope with the explosion in information recovered from expeditions of importance for biblical studies.

For many years, under Albright's influence, the hybrid field of Biblical Archaeology had a life of its own in the United States and was considered a coherent discipline. But many outside of Albright's sphere were unsure whether this field was a division of biblical studies or part of the broader world of general archaeology and saw these two pursuits in some disciplinary tension. At the same time, biblical scholars grew increasingly skeptical that archaeology could provide context for the specific events of the biblical text. Individual excavations persisted, but work ceased to be framed by research designs derived from the questions of Biblical Archaeology.

Yet archaeologists of the last twenty years have continued to produce material for biblical studies that is too critical to be ignored: inscriptions such as the Tel Dan stele or Khirbet Qeiyafa ostracon, debates on the chronology and stratigraphy of the 10th century BCE or the stratigraphy of the Shechem temple, and publications such as those of the Jewish Quarter in Jerusalem or Herodian Jericho. Shifts in archaeological theory and biblical scholarship now present new potential for rapprochement between archaeology and the Bible. Recent archaeological work has uncovered the lifeways of the biblical world and begun to suggest how understanding these lifeways transforms the reading of the biblical text.

The Oxford Encyclopedia of the Bible and Archaeology represents a new way of conceiving of the relationship between archaeology and biblical studies that allows the results of a wide cross-section of excavations and regional studies to contribute to the interpretation of the biblical text through an elucidation of the lifeways of the ancient world. By going beyond mere architecture and chronology into the social organization of biblical society, the Encyclopedia is an important methodological breakthrough for the study of the Bible and archaeology.