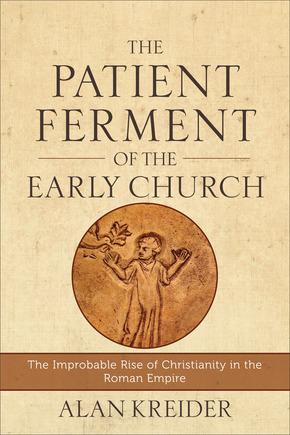 During the three centuries before the conversion of the emperor Constantine, the Christian church grew in the Roman Empire. It grew despite disincentives, harassment, and occasional persecution. What enabled Christianity to be so successful that, by the fifth century, it was the established religion of the empire?

In this unique historical study, Alan Kreider delivers the fruit of a lifetime of study as he tells the amazing story of the spread of Christianity over its first four hundred years. Challenging traditional understandings, Kreider contends the early church grew because patience was of central importance in the life and witness of the early Christians. Patience was the virtue about which the patristic writers wrote most--Tertullian, Cyprian, and Augustine all wrote treatises on it. Patience entailed trusting God, who was inexorably at work; obeying Jesus, who embodied patience and called his followers to live in unusual, patient ways; and responding to people who were attracted to their life and message in such a way that they would be formed to become patient believers. Instead of writing about evangelistic method, the early Christians reflected on prayer, catechesis, and worship, all of which formed believers to have patient reflexes and to participate in a church that grew not by plan but by ferment. This book will benefit professors, students, and scholars of ancient Christianity, mission, liturgy, and Christian formation as well as pastors and church leaders.