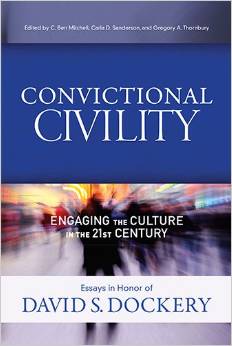 Jesus calls his followers to be salt and light in a fallen world. Through the ages, believers have grappled with what form Christian cultural engagement should take. Various Christian thinkers have advocated models of engagement, and some recent models have used the discourse of the battlefield to speak of “winning the culture war.” In a post-Constantinian, post-Christian culture, how are believers to live in the world without being of the world?

Throughout his ministry, David S. Dockery has persistently advocated “convictional civility” as a vision for contemporary engagement—in which witness is more important that winning, and fidelity is more effective than fighting. In this volume, respected Christian leaders honor him by presenting these essays that explore convictional civility as a lifestyle of bearing witness for Christ and of contributing to the common good. From the pulpit to the public square and from the campus to the courtroom, followers of Christ are to demonstrate Christian virtues through winsome civility and Christian values through wholehearted conviction.